As the Crow Flies by Craig Johnson 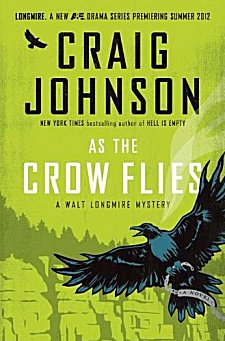 First Line: "I wanna know what Katrina Walks Nice did to get kicked out of a joint like this for sixty-one days."

In two weeks, Sheriff Walt Longmire's daughter will be married, and wedding planner Walt isn't doing so well in working through Cady's to do list. When her chosen wedding venue isn't available, Walt and his best friend, Henry Standing Bear, travel to Painted Warrior cliffs on the Cheyenne Reservation to see if it would be a suitable substitute. The last thing Walt needs is to see Audrey Plain Feather and her infant son plummet from the top of the cliff.

Audrey dies, but Walt's faithful four-legged companion, Dog, finds the infant Adrian and refuses to be parted from the tiny person even when they arrive at the hospital. Walt knows his daughter's wedding is his priority, and he's just about to hand off the investigation when he runs into the "nascent volcano" known as Tribal Police Chief Lolo Long. Lolo, a returned Iraqi war veteran, is pretty new to the job. She's fired all her officers, drives like A.J. Foyt, and has so much anger bottled up inside that Walt just can't walk away. He knows that, if she's willing to listen, he just has to take her under his wing... or she's not going to live very long. But how will Cady react to all this? Walt is stretched thin as he tries to be the father of the bride, a mentor to Lolo, and the one who brings the bad guys to justice.

Since his first book, The Cold Dish, in 2004, Craig Johnson has been one of what I call my "auto-buy authors". When I hear that he's got a new book coming out, I automatically buy it; I don't have to know what it's about. In eight books, he's never disappointed-- in fact, he just keeps getting better. This man knows how to write a blend of mystery, humor, action and character that's impossible to beat.

The mystery is a good one. Johnson includes an excellent piece of misdirection that threw me right off the trail. While Walt does his investigating, we also get the opportunity to meet several of the inhabitants of the Cheyenne Reservation.

For those of you who've missed Walt being at home with Henry Standing Bear and Dog, you're going to enjoy this book even more. If you're a fan of his undersheriff, Victoria Moretti, you might pout a bit. Vic is pretty much absent in this go-round, but there's a good reason for this. Tribal Police Chief Lolo Long is such an intense, strong female character that Johnson made a wise decision to let Lolo get her feet set before meeting Vic. And I certainly do hope that this isn't the last time we see Lolo. What a wonderful character! (Even though I did want to deck her the first time I was introduced.)

As the Crow Flies has everything long-time fans of Craig Johnson's writing have come to expect: an interesting storyline with plenty of action that moves swiftly and surely, laugh-out-loud humor in all the right places, down-home wisdom, a cast of characters that are as beloved as our own family and friends, and a scene or two that can bring tears to your eyes.

Haven't read a Walt Longmire book before? Never fear, this one stands alone quite well, but be warned-- after you finish As the Crow Flies, don't be surprised if you find yourself tracking down all the rest of the books in this series. They're that good.

Genre: Police Procedural (and so much more), #8 Sheriff Walt Longmire mystery
Rating: A+
Source: Net Galley
by Cathy at Tuesday, May 15, 2012