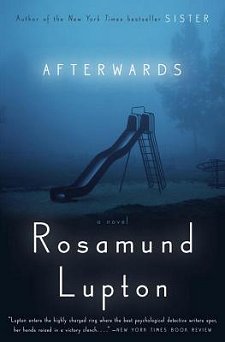 First Line: I couldn't move, not even a little finger or a flicker of an eye.

It's Sports Day at Sidley House School. Grace Covey's eight-year-old son, Adam, has gone inside the school to bring out the birthday cake that he's sharing with his classmates while Jennifer, her seventeen-year-old daughter, is up on the third floor filling in for the school nurse. Grace has simply come to pick her children up at school, an ordinary, everyday task. But what began as a simple task turns into a nightmare when Grace looks up at the school and sees black smoke billowing out of the windows.

Sidley House School is on fire, and her children are inside.

"And then [Grace] was running at the velocity of a scream." As she comes to the school entrance, she sees that her son is outside and safe, but Jenny is still inside. Jenny needs her. And so Grace fights the heat and the smoke and the fear and the panic and the pain until she finds Jenny... but Grace doesn't have the strength to get them outside to safety. They are both rushed to the hospital. Grace has suffered severe head trauma, and Jenny has suffered bad burns and intense smoke inhalation.

This story is told by Grace as if she's talking to her husband, and she has quite the story to tell. You see, she and Jenny both have out-of-body experiences. They leave their battered bodies and follow their friends and loved ones. They hear what's being said, and although they can talk with each other, no one else can see or hear them.  A lot is being said because what was originally a tragic fire is really arson, and it also seems as though someone wants to make sure that Jenny dies. Did she see the person who started the fire?

Grace's sister-in-law, Detective Sergeant Sarah MacBride, in many ways is the hero of this book. Her family has been dealt a devastating blow. Sarah wants to make sure that her family survives, and she goes about it the only way she knows how: by doing her job. Sarah proves to be tireless at tracking down witnesses, at searching for clues, at reading interview transcripts and teasing out tiny inconsistencies and peculiar word choices. She simply will not give up.

Although the ultimate ending of the book really comes as no surprise, I enjoyed Lupton's meticulous plotting of the investigation. This is the sort of case which relies on listening to how people say things as well as listening to what they don't say. It is a case of nuance and shadow. Taken simply as a mystery, this is an excellent read. But Grace Covey takes this book beyond mystery and whodunit. As she watches her husband and son, as she talks with Jenny, and as she follows Sarah, she learns what extraordinary people her family members are. She learns about herself. And she learns that "the last of the senses to go is love."

This is an extraordinary read that kept me mesmerized from first page to last-- often with a lump in my throat and tears in my eyes. If you have someone in your life whom you love more than life itself, you will also be deeply affected by  this book. In her depth of characterization and psychological nuance, Rosamund Lupton reminds me of Louise Penny. Like Penny, Lupton can take subject matter that's profoundly sad and create something very beautiful and life-affirming. I was impressed by Lupton's first book, Sister. I am blown away by Afterwards.