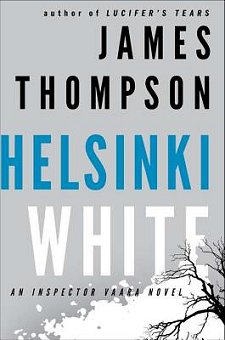 First Line: It's May second, a sunny Sunday, a chilly spring evening.

The national chief of police wants Kari Vaara to head a black ops unit intended to put the drug dealers in Helsinki out of business. Any money confiscated will be divided between the chief of police, various political figures, and Vaara and his team-- with the bulk of the money being used to finance the entire operation. Vaara agrees because he truly feels that this is his best chance to do good. First though, he has other business to attend to-- namely that of welcoming a brand-new baby daughter into his life... and brain surgery.

Vaara can't wait to be rid of the blinding daily migraines he's had for over a year. He doesn't even care about the side effects the doctors tell him of. In fact, he has other, elective, surgery done at the same time. All surgeries are a success, especially the one to remove the brain tumor. The unfortunate side effect is that Vaara is now an emotional zero. He feels nothing. Vaara watches his two hand-picked team members get a little over-zealous with the violence, and although he warns them to be more careful, it's as though nothing's happened. His beloved wife Kate finds out what's going on, and her behavior begins to change. Vaara looks on with a dispassionate eye.

Those looking for the Kari Vaara of the previous two novels, Snow Angels and Lucifer's Tears, will not find him here. Surgery has rendered him monochromatic, an emotionless sociopath, and the world about which he tells us is made even more chilling by Vaara's impassive narration.

Vaara's henchmen are good at what they do. The drugs disappear from Helsinki's streets, and the dealers turn on each other as their money and contacts dry up. While the other two target the drug dealers, Vaara's recuperation means that he's focused on other matters; in particular a year-old kidnap and murder, and the recent murder of a woman who was a staunch advocate of immigrants' rights.

As in so many other countries, there is a rising tide of racial hatred in Finland as thousands of immigrants from Africa, Asia and the Mideast flock there to live. To have Vaara listen to bigots spout disgusting racial slurs and not even bat an eye makes the entire experience almost surreal.

As I mentioned before, if you've read Thompson's previous two novels featuring Kari Vaara and you're expecting a "more of the same" novel, you are not going to get it. Surgery has changed him, and it's anyone's guess as to whether or not he will ever return to his old self. Thompson believes that the times are a-changing, and the days ahead aren't necessarily going to be pretty. The "new" unsettling Kari Vaara of Helsinki White is the perfect harbinger of doing the wrong things for the right reasons, for the well meaning amongst us being taken advantage of by the corrupt, by this age of technology making hatred every bit as easy to spread as love and acceptance.

To have a character whom we know is a good guy to stand quietly in the middle of this maelstrom as his marriage disintegrates, as his career crumbles, and as he sees all the overwhelming corruption around him, adds a layer of horror to Helsinki White that would not have been there if Vaara had been his old self. If you can leave any preconceived expectations you may have at the door before you begin reading this book, you're in for an excellent-- if disquieting-- read.