Have Mercy on Us All by Fred Vargas 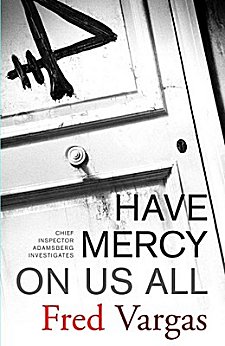 First Line: When manie wormes breede of putrefaction of the earth: toade stooles and rotten herbes abound: The fruites and beastes of the earth are unsavoury: The wine becomes muddie: manie birds and beastes flye from that place....

In a small Parisian neighborhood the age-old tradition of the town crier still goes on. The self-appointed crier, Joss Le Guern, reads out the daily news, bits of gossip, the weather forecast, items for sale... and ominous messages in strange language that are paid for and placed in Le Guern's message box by an anonymous source-- messages that seem to warn of an impending plague.

Concerned, Le Guern brings the messages to the attention of Commissaire Jean-Baptiste Adamsberg and his right-hand man, Adrien Danglard. When several apartment buildings have their doors painted with the ancient symbol to ward off plague, Adamsberg knows there is a connection. Then a flea-bitten corpse with plague-like symptoms is found, and the Commissaire is under pressure to solve the case and restore calm to a frightened city.

Once again Vargas has worked her magic. She's created a tiny neighborhood in Paris populated with wonderful characters and a true feeling of community. There is more to the plot than first meets the eye as well. At first seen as a straight-forward mystery involving the bubonic plague, Vargas slowly includes snippets of evidence and tiny clues that make the reader wonder if there's not something more to the plot. This is Vargas, so of course there's more to it than the plague!

Vargas is so skilled at plotting that I was convinced that Adamsberg was after the wrong villain. But-- like twisting the barrel of a kaleidoscope-- the facts kept shifting in and out of focus, regrouping themselves into different patterns, and I slowly began to realize what was going on.

As ever, Adamsberg is the master chef of the book. Yes, he has his men gather all the clues, follow the chain of evidence, turn everything over to the pathologists and other fact-finders, but he relies on his thought processes. All the evidence, all the interviews, all the random impressions are like the ingredients in a recipe. It's up to Adamsberg to put everything together and add the spice of his intuition to come up with a memorable dish. If you're in the mood for a savory meal, I heartily recommend a Commissaire Adamsberg book by Fred Vargas! If you're new to these books and are wondering whether you should start at the beginning of the series, it's really not necessary. Have Mercy on Us All stands alone quite well.