A Double Death on the Black Isle by A.D. Scott 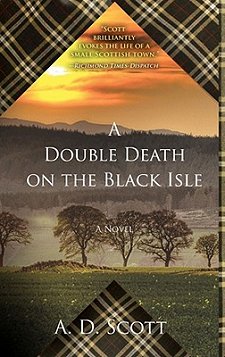 First Line: Cycling across the suspension bridge over the wide, fast-flowing river Joanne Ross looked down-- no, no bodies.

The people living on the Black Isle in Scotland are oftentimes a contentious bunch. The Tinkers are trusted by no one, but their services are badly needed because so many Highlanders died a decade before in the Second World War. The fishermen there have nothing in common with the farmers, and the villages keep themselves apart from the town. When two deaths occur on the same day that involve the same families from the same estate, all the inhabitants of the Black Isle have theories as to what really happened.

Joanne Ross has been given the prize assignment of reporting on these murders, but she feels there may be a conflict of interest. After all, the woman at the very heart of both deaths is one of her closest friends. Joanne knows the story could be her big break, and as a woman-- and a single mother-- in the Highlands of the 1950s a good job like this is almost unheard of. As the staff of The Highland Gazette begin their investigations, secrets are uncovered that will change this remote corner of Scotland.

Author A.D. Scott has said that she is "a huge fan of writers who can transport you to a time and place where you feel you know a landscape intimately from the author’s description – even if it is a landscape completely foreign to you." This is exactly the type of book she writes. The staff of the newspaper are so well-drawn that one feels as though one's leaving a group of dear friends by the time the last page is turned. They also make working on a small town newspaper staff in the Highlands of that era come to life.

Both murders kept my interest throughout the book, and the fact that the second one had no firm resolution except in individual readers' minds made me smile. Not everything in life is tied up with a pretty bow at the end, and I do like that to happen occasionally in the books that I read.

Two characters shine especially brightly in A Double Death in the Great Glen: Joanne Ross, a woman who's lived in an abusive marriage for ten years before sending her husband packing. Not only does she have to contend with a man who enjoys using her as a punching bag, but she has to contend with society's and her family's opinions as she tries to begin a new and better life for herself and her daughters. She is an endearing-- and sometimes maddening-- character. Joanne refuses to behave the way that we readers would like, but she is slowly coming around to a true sense of her own worth and capabilities.

The second character is Joanne's friend, Patricia Ord Mackenzie. In turns charming, intimidating, manipulative and vulnerable, she always remains enigmatic-- and extremely intriguing. So much so in fact, that I wouldn't mind at all if she appeared again in a future book.

A.D. Scott immerses her readers in the lives of her characters and in the landscape and mindset of the Highlands of Scotland in the 1950s. There is so much to savor: mother-daughter relationships, family loyalty, intricately plotted murders.... If you have yet to savor a book written by this talented writer, I urge you to do so. Once you've finished one of her stories, it takes a while to return to the present day!