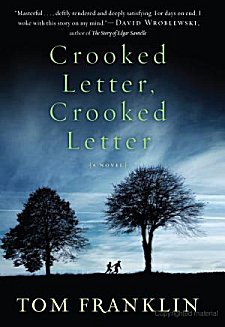 First Line: The Rutherford girl had been missing for eight days when Larry Ott returned home and found a monster waiting in his house.

The last thing Larry Ott needed was finding that monster because his life has been one very long row to hoe. Only child of lower-middle-class white parents, Larry has always been on the outside looking in. Bad at sports, preferring books and trivia... the only time Larry ever felt as though he belonged was the fleeting few months back in the late 1970s when he became friends with Silas, the son of a poor, black single mother. Things happened, words were spoken; the two boys grew apart. Silas became known as "32" due to his talent on the playing field, and Larry was the kid everyone laughed at until the night that he took a girl out on a date.

Larry's date never came home. Her body was never found. Teenaged Larry kept telling the police that he didn't have anything to do with the girl's disappearance, but the whispers grew, and the fingers kept pointing. Larry is growing old under the heavy, mildewed blanket of suspicion while former friend Silas is a police officer in town. When another girl disappears, the small town sages nod their heads, whisper, point their fingers-- and once again Larry hears footsteps coming up to his front door. But this time, this girl's disappearance is going to make Larry and Silas dig up and expose a past that they've kept buried for decades.

Author Tom Franklin swiftly introduced me to Larry Ott, misfit and social outcast. By stockpiling the minutiae of Ott's life, Franklin not only got me acquainted with a very sympathetic character, he showed me how a life can be forcibly reduced and shrunken bit by bit-- each detail fitting carefully into place like the last section of bricks in a wall. The contrast between Ott's life and that of Silas could not be greater, but as their stories are told, the facts don't quite add up. The wrong mortar has been used in building the wall around Ott. That wall needs to come down; the truth needs to come to light. The fight may have been leeched out of Larry, but will Silas have the strength to do what's right?

The language, the setting, the story, and the two characters of Larry and Silas held me captive until I finished this book. I was able to piece together what had happened to the girl who disappeared when Larry was a teenager, so that came as no surprise. What held me was needing to know what Silas would do. In many ways Silas had a brick wall built around him, too. That's the type of thing that hatred and prejudice and suspicion does. It takes real courage to make the wall topple. I knew that Larry wasn't strong enough to send his wall tumbling down, and I wasn't convinced that Silas could do it either.I had to keep reading so that I could know for sure.

Two characters that make you care about them. The ability to right an old wrong. Crooked Letter, Crooked Letter is very good reading.