On the Wrong Track by Steve Hockensmith 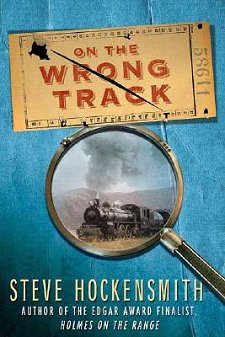 First Line: Few things dampen a man's appreciation for natural splendor more quickly than the sound of another man's retching.

The man who's retching? Gustav "Old Red" Amlingmeyer. The man who has to listen to him? His brother, Otto "Big Red" Amlingmeyer. Something more is disagreeing with Old Red than the fact that he's traveling on a train. In fact, he has his brother completely mystified. You see, Old Red has the deep distrust of railroads that just about everyone does who's been raised on a farm in the late 1800s, and Big Red would love to know why his older brother insisted that they become railroad detectives on the Pacific Express.

The answer is rather simple: Old Red is tired of being a cowboy. He wants to follow in the footsteps of his hero, Sherlock Holmes, and give "detectifying" a try. Little do the two brothers know that they're in for a wild ride. They're being shadowed by a gang of outlaws who've already shown that they can rob the Pacific Express. There's a baggage car stuffed to the rafters with all sorts of deadly secrets, and amongst the colorful passel of passengers lurks a vicious killer. Getting trapped on this train as it barrels through the snowy High Sierras means that the Amlingmeyers need to be as good at deductifying as Mr. Holmes... or they're going to be fertilizer for the daisies that will bloom come spring.

My first piece of advice to you (besides "Get your hands on this book!") is to buckle up. It's been a few days since I've read On the Wrong Track, and I still feel as though I just fell off a rollercoaster after one helluva ride. Putting the Amlingmeyers on a train is a piece of genius. Those old steam locomotives scream Wild West, and what better setting for two cowboy detectives and a memorable cast of passengers?

Once that train pulls out of the station, the pace turns into a runaway. One calamity after another strikes until it's almost impossible for those two detectifying brothers-- or the reader-- to catch their breath. To say I loved this book would be an understatement. I didn't so much read it as experience it. Steve Hockensmith gave me a ticket to ride, and I think I whooped and hollered all the way down the tracks. However, I'd like to caution you about one thing: If you have a fear or loathing of our legless reptilian brethren, I'd advise you to skip chapter twenty-three. I'm still keeping my Louisville Slugger at hand... and sitting with my feet off the floor.

If you have yet to read a book in this series, get your hands on one and read it! Odds are you'll then be following Old Red and Big Red wherever they may wander. When I turned the last page of On the Wrong Track, all I could do was remove my Stetson, beat off some of the dust, and grin.