No Mark Upon Her by Deborah Crombie 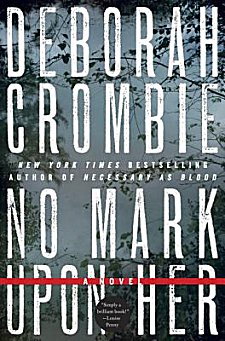 First Line: A glance at the sky made her swear aloud.

The Kincaid and James household is still getting used to the new addition to their family. Gemma's leave is almost over, and when she returns to work, Duncan will be the one staying at home with the children. However, when a search and rescue team discovers a woman's body in debris along the banks of the Thames, their plans may go up in smoke. The dead woman, Rebecca Meredith, not only was a rower training to compete in the Olympics, she was a high-ranking detective with the Metropolitan Police. This is a case which must be solved quickly.

Matters are further complicated when a detective at the Notting Hill station asks Gemma for advice regarding a separate investigation. Gemma welcomes the chance to focus on something besides home and hearth, and she lends a hand. The information she uncovers ties in with Duncan's case, revealing a possibly related series of crimes that widens the field of suspects. Someone has a secret that must remain hidden at all costs;  a secret involving powerful people that could reach right into the heart of the Metropolitan police.

As in other books in this series, Crombie incorporates a slice of English life into No Mark Upon Her-- this time competitive rowing. (In 2010, a quarter of a million people came to the banks of the Thames to watch the races between Oxford and Cambridge Universities, and this is only one of the many regattas held each year.) This information adds texture and atmosphere to a multi-layered story.

As Duncan begins investigating, what seems to be a simple case of murder soon turns into a cover-up, and eventually the cover-up also turns into something more. Secrets have been festering beneath the surface for years, and those secrets have turned into a deadly Hydra that Duncan and Gemma must vanquish before any more people lose their lives.

The search and rescue team members Kiernan and Tavie-- as well as their dogs-- are welcome additions to the cast, and I certainly wouldn't mind seeing them in future books. Speaking of that cast, it's one of the best in fiction. The relationships between Duncan, Gemma, their children, and the other people in their lives grow and change in each book. I feel as though I should be able to walk up to their door in Notting Hill, ring the bell, and be welcomed inside for a cup of tea and a nice long chat. When characters have that much depth, it makes for a series that readers never want to end.

If you've never read a book in this series before, don't be shy about starting with No Mark Upon Her. You can read it and not feel lost among the characters and their history. But if you're looking for a series that has it all-- like this one does-- I suggest you begin at the very beginning (A Share in Death). I almost envy the pleasure that awaits you!