Buried in a Book by Lucy Arlington 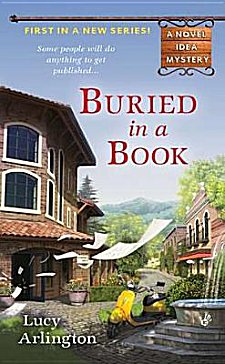 First Line: I thought I'd be writing articles about church bazaars and Girl Scout cookie sales until I retired, so you can imagine my surprise when, at forty-five years of age, I was handed my very first pink slip.

Newly unemployed journalist Lila Wilkins needs a job-- not just because she has to keep body and soul together-- but because she has a son who will be enrolling in college very, very soon. Almost as if they heard her cry for help, the Novel Idea Literary Agency in Inspiration Valley, North Carolina, places a newspaper ad for an intern. Lila applies, she's hired, and on her first day an aspiring author drops dead in the office. No one seems to care much about the man's death; after all, he was just some smelly vagrant who came in every day and drove them crazy. Tender-hearted Lila thinks the man deserves more than this. Without really knowing what she's doing, she begins to check into a few things, and when she stumbles across something that has someone trying to scare her off, she knows she's on the trail of a killer.

I jumped at the chance to read this book, primarily because I love the idea of a mystery series set in a literary agency. The setting does pay off because I did get a feel for the way such a place works. The Novel Idea Literary Agency is filled with quite a cast of characters, too, and that should lead to many interesting books in the future.

I wasn't prepared for how much I liked the main character, Lila Wilkins. She's a genuinely nice person who's a hard-working single mother raising a  typical (thoughtless) teenage son. She's got a rather wacky and loving mother, and when Lila moves to Inspiration Valley, she even finds a couple of handsome, intelligent men that make her heart go pitty-pat. But it's Lila's heart that really made me warm to her as a character. The woman genuinely cares about people, and she goes out of her way to see the good in everyone. I love Lila's empathy, and I find it refreshing after reading about so many characters who have jaded, sarcastic tones of voice.

Although I immediately knew the identity of the book thief, it didn't put me off reading this book. Sometimes the only thing a mystery has going for it is the element of surprise. Take that away, and there's nothing left to hold your interest. This is certainly not the case with Buried in a Book. There's much more to the plot than deducing the identity of a thief and/or murderer, and the cast of characters is so engaging that I definitely want to read many more books about them.