Slash and Burn by Colin Cotterill 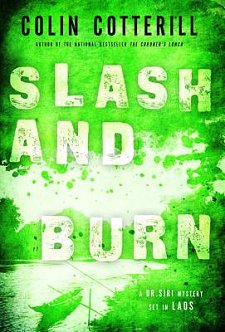 First Line: You know? Being shut up in a cage with a live bear was a piece of cake compared to being drunk and high in charge of a half-a-million dollars' worth of flying metal.

Dr. Siri Paiboun, the National Coroner of Laos, is getting up close and personal to the age of eighty. He's announced his retirement, and he's counting down the days until he no longer has to deal with his incompetent superiors. You know what happens when you begin that countdown, don't you? Sure enough, Dr. Siri is placed on a joint team of Americans and Laos charged with finding and identifying the body of an American airman who's been missing in action for ten years.

There's no way Dr. Siri can weasel out of the assignment. The only thing he manages to do is to stack his team with his wife, friends and co-workers. If he's being forced to go, he may as well try to enjoy himself. (If there's any other reason why he wants his nearest and dearest to go with him, he's not sharing the information.) With the Americans bringing the food and in charge of the transportation, they journey to a remote area in northern Laos. Arriving at their destination-- a decrepit hotel in the middle of a field of unexploded ordinance-- smoke begins to fill the air.

If it were a few months later in the year, the smoke could easily be attributed to the natives' "slash and burn" farming techniques, but it's much too early for that. Dr. Siri knew before they ever started out that something was going on, and the poor visibility proves that someone is doing their best to blow smoke in his eyes. When a member of the group is found dead, Dr. Siri knows that he's got to put all the clues together before the fortune teller's predictions of his death come true.

According to the dust jacket of this book, this is the final installment of the Dr. Siri series, and I will miss it. Cotterill has concocted a devious, multi-layered plot in which it's easy to become confused. This confusion arises because most of the people are saying one thing and doing something entirely different. They all have their own agendas.

What is needed is someone who's used to this way of running things-- someone who can see past the smoke and mirrors-- and who better than Dr. Siri? Dr. Siri who has lived in France and has an acquaintance with cultures other than his own. Dr. Siri, who is no stranger to guerilla fighting in the jungle. Dr. Siri, who knows how to look past the surface and see directly into the hearts of those around him.

Allowing Siri to hand-pick his own team is ensemble casting at its very best. For long-time fans of the series, each regular character has his or her part to play in the story. For those readers meeting these wonderful people for the first time, they're getting to see them at their very best. As things begin to go wrong and the team is forced to stay past the range of the Americans' food supplies, Siri's wife, Madame Daeng, is put in charge of the hotel cooking staff and the contents of the hotel pantry. Madame Daeng alone is worth the price of admission. That entire food sequence had me howling with laughter.

And it is all due to wise Dr. Siri, whose devious mind knows no limits in resourcefulness for surmounting the difficulties he finds in his path. Dr. Siri, his friends, and his co-workers live in a world in which they've had to fight for survival. But that fight hasn't taken the joy from their lives. If I take anything away from reading the books in this series, it's that it is possible to survive in a harsh world and still find life, laughter, love, and joy all around. It has everything to do with having the right people by your side. Dr. Siri, Madame Daeng, Nurse Dtui, Mr. Geung... over the course of eight books, I've come to love you all. You will be missed.