Scene of the Crime with Author John J. Lamb!

Once upon a time, I used to collect teddy bears. Then I imported a very special one-of-a-kind English teddy bear and had to make room for his things in the house. I donated most of my collection to the local police department knowing that these lovable stuffed animals could give comfort to traumatized children. I still have some of my bears, and they get to play underneath all my Christmas trees during the holidays. When it's not that most wonderful time of the year, I do know of a place where I can get my "teddy bear fix"...

John J. Lamb's Bear Collector's mystery series. During John's career in law enforcement, he was a street cop, a hostage negotiator, a CSI, a homicide investigator, a detective sergeant, and the hostage negotiation team leader. His wife, Joyce, is a latent fingerprint expert and crime analyst. They live in the Shenandoah Valley of Virginia where they've been known to go to a teddy bear show or two.

As you can see just from his bona fides, John has plenty of crime solving experience as well as a fondness for teddy bears. What you won't see until you pick up one of his books is that he's also a very talented writer.

I picked up the first Bear Collector mystery simply because I wanted the aforementioned teddy bear fix. As I read The Mournful Teddy, I discovered that I'd picked up a very well-written book with knowledge of both police work and teddy bears, as well as an interesting plot, a good sense of humor, and some characters that I just had to get to know better. It's my hope that you'll visit John's website to get to know him a bit better, and that you'll take the time to get your hands on one of his books and read it. Chances are very good that you'll be wanting to read the rest! 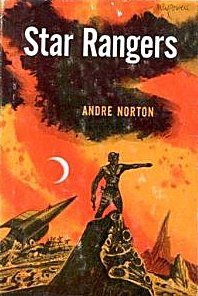 That book was Star Rangers, a science fiction novel by Andre Norton.  It was 1967 and I found it on the shelf at the local library.  I'd never read anything like it and was engrossed from the outset.  The story begins with the premise that the galactic civilization is collapsing and a Star Patrol ship crashes on an unknown planet that turns out to be Earth.  I know it sounds fairly unremarkable, but there were several things about it that made it special.  For starters, Norton was wonderful writer.  The characters seemed like actual people--even the non-human members of the patrol.  And by God, Norton knew how to end a book powerfully...something I've since learned is quite difficult to do.  Up until that time, books were boring...something you had to read because an adult demanded it.  After that I became a voracious reader and soon began to wonder if I could actually write a story.

In spring and summer, I spend a lot of my free time working in our flower and vegetable gardens with my wife.  There's something emotionally refreshing about being outside and working with the soil.  I also devote a joyful hour every day to walking my three golden retrievers along back roads near the Shenandoah River.  Some weekends my wife and I go to teddy bear shows.  Around this time of year, we go out to orchards on the west side of valley and bring back a bushel of apples, which we soon turn into apple sauce, apple butter, and the most incredible apple pie you've ever tasted.

My wife and I live in farm country outside of a small town in the Shenandoah Valley of Virginia.  The Blue Ridge Mountains and Shenandoah National Park are about three miles to the east as the crow flies.  If you decide to drive Skyline Drive through the park, come in mid-October.  The autumn foliage is incredibly beautiful.

That's a hard one to answer, because I've never really given it any thought.  My wife says that my jaw-line reminds her of Spencer Tracy.  However, back when I worked homicide, my partner said that I looked and behaved like Gene Hackman as the character of Lex Luthor in the original Superman movie.

Like so many male authors, I first became interested in the genre by reading Raymond Chandler's books.  So, of course, Philip Marlowe was a great favorite.  Yet, the longer I was a cop the more I found Marlowe's insouciance in the face of danger to be unbelievable.  When things turn to hell and someone points a gun at you, believe me, you aren't thinking of something to say that's witty or tough.  More recently, my favorite character was Inspector Frost from R.D. Wingfield's books.  Inspector Frost is one of the few fictional cops who resembles a genuine homicide investigator.  He's a burn-out, yet not self-pitying.  He finds emotional refuge in coarse humor and works nonstop to catch the killer. 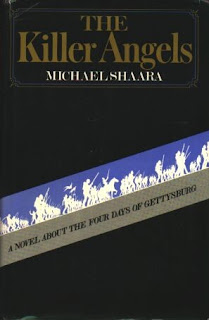 The Killer Angels by Michael Shaara, which won the Pulitzer and was cited by Ken Burns as an inspiration for his wonderful PBS Civil War miniseries.  The book had the same impact on me as Star Rangers.  Shaara took a potentially hackneyed topic like the Battle of Gettysburg and turned it into a tense, thrilling, and heartbreaking book.  The problem was that when I eventually started my first (and deservedly forgotten) novel, I subconsciously modeled my writing after Shaara's.  It didn't work and the experience taught me a lesson.  I could admire someone else's work, but I had to develop my own voice.

My very first book was San Diego Specters, a collection of investigations into the haunted (and not-so-haunted) places of San Diego.  It was 1998 and I was going to my very first book signing at a Barnes & Noble.  Arriving at the shop, I saw a poster in the window that featured my book and a picture of me.  I just stood there for a few seconds in awe.  You work so long as a writer, hoping that someday you'll be published, so there's a certain element of unreality when you confront proof that your dream has come true.

I was doing a book signing at a teddy bear show near Baltimore when Dan, an old police coworker, showed up.  We'd been street cops and detectives with Oceanside PD in California, back when it was one of the more violent cities in the state.  Dan began telling old war stories...stories about ghastly murder scenes and fights with violent suspects, and the horribly funny things cops say to each other when confronting tragedy.  The tales made the book buyers and my book vendor stare at us in shock.  You see, my reputation nowadays is the smiling teddy bear guy who writes cozy mysteries.  People don't know that I was a tough cop in a savage city.  The funny thing is that those war stories made some people buy the books who otherwise wouldn't.  The customers told me that if I could write half as well as I told a story they knew they'd enjoy the book.

I don't think anyone knows what the unintended consequences of the electronic revolution currently overtaking books will be.  My fear is that it will eliminate bookshops, which would be a very bad thing.


Thank you so much for spending this time with us, John. We appreciate the opportunity to get to know you a little better.

May your book sales do nothing but increase!
by Cathy at Monday, January 30, 2012