The Rope by Nevada Barr 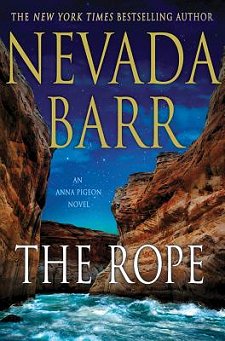 First Line: Regis Candor took a swig of his beer and watched his neighbor, Jenny Gorman.

A fiercely held belief among old-timers is that Glen Canyon was even more beautiful than its relative to the west, the Grand Canyon. To those of us who've seen the Grand Canyon, it defies belief that another could be even more awe-inspiring. None of us will ever be able to form our own opinions, however, because a dam was built on the Colorado River, Lake Powell slowly filled, and the Glen Canyon National Recreation Area was formed.

Anna Pigeon's husband is dead, and life as she's known it has ended. In an attempt to escape memories and make a clean start, she decides to become a park ranger and accepts the first opening she's offered. Before she knows it, she's boarded a bus and headed for Page, Arizona, and Lake Powell-- an incredible blaze of colors from the water and the sky to the red sandstone cliffs.

She doesn't mix all that much with the other employees, and on a day off she decides to go for a hike... and never returns. Since she wasn't the friendliest of souls, her co-workers think she didn't like the job and has moved on, but that's not the case.

Anna wakes up, trapped at the bottom of a natural dry well. She's naked. She has no supplies, and she has no clear memory of how she got in this situation. As Anna slowly pieces things together she realizes that someone has put her in this natural prison and that no one else even knows that she's missing. If she's to survive, this city girl is going to have to survive, to outwit her captor, and to emerge triumphant. The alternative is unthinkable.

Once again Nevada Barr hits a home run. Her setting is a land of incredible beauty, and she's a master of putting her readers right in the middle of the place she's chosen-- not just with breathtaking descriptions, but with facts. It's evident that Barr is as sickened as I am with how visitors treat the area, and some of her facts made me glad that I never tested the waters during any of my visits there.

This prequel was a sheer delight to read, allowing me to see Anna as she was at the very beginning and to watch her develop into the character I've come to love and trust. If you haven't read any of the Anna Pigeon books yet and you're wondering if you should read them in order of publication (starting with Track of the Cat) or in chronological order with The Rope, you could do it either way. (Personally I would prefer order of publication.)  For those of you who have no intentions of committing to the entire series, please don't pass up the opportunity to read this book.

If you read the last book in the series, Burn, and did not care for the violence or the rather graphic subject matter, you don't have to worry about it in this book even though your antennae probably twitched at the words "naked, at the bottom of a well."  Just sit back, relax, and enjoy this story about our Anna at the very beginning.