A Place of Secrets by Rachel Hore 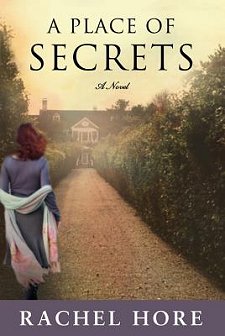 First Line: The night before it all begins, Jude has the dream again.

Auction house appraiser Jude Gower answers the telephone one afternoon at Beecham's Auctioneers in Mayfair and finds herself embarking on a dream job. At Starbrough Hall in Norfolk, England, she is to examine and price the manuscripts and instruments of an eighteenth-century astronomer. She is welcomed by Chantal Wickham, and since both have lost their husbands, Jude feels close to the older woman almost immediately. Hard times are forcing the Wickhams to sell the astronomer's works; they've already sold most of their land and the old tower that was built as an observatory by Anthony Wickham, the astronomer. It was in the tower that Anthony Wickham and his daughter, Esther, made their most amazing discoveries.

Although Jude has spent most of her life in London, her family once lived in the neighborhood of Starbrough Hall, and she feels at home there. She meets Euan, a well-known writer and naturalist, and spends as much time as she can with her sister and six-year-old niece-- who's having disturbing dreams... the same dreams that Jude had as a child. The further Jude delves into the life of Esther Wickham, the more she begins to wonder if these dreams are passed down from generation to generation. Can she possibly find the answers she needs to make the dreams stop before someone is hurt?

A Place of Secrets fleshes out the standard romantic suspense skeleton very well. Jude is a widow who's spent the past few years putting her dead husband on a pedestal. No man she's met can measure up to her memories. Euan is the perfect hero: handsome, articulate, talented... and jealously guarded by Jude's sister. Since the sisters haven't gotten along for most of their lives, Jude tries to steer clear of Euan to keep the peace. It's rather easy because the fascinating part of this book is all about Esther Wickham, a foundling who became a willing apprentice to a gifted amateur astronomer. Jude is every bit as mesmerized by Esther as the reader.

There is much said about dreams repeating themselves through the generations, but there's very little, if any, real paranormal activity going on at Starbrough Hall. The story has everything to do with how secrets fester the longer they remain hidden, with how the facts can be distorted and misinterpreted throughout the centuries. Jude proves to be an excellent detective as she catalogs the treasures that are soon to be sold. The more she learns about Esther, the more she is compelled to search for every single detail that exists. Esther is the stand-out character in this book, and she doesn't speak in dreams. She speaks the only way she can: through the documents and objects that were left behind.

Unraveling the pieces of the story and laying bare all the hidden details became my focus as I read A Place of Secrets. It was a difficult book to put down, and I find that the character of Esther haunts me still.