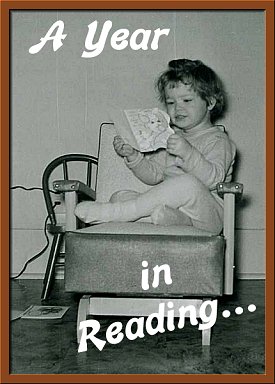 Time flies when you're reading good books; at least it does for me. I've been reading for a long time, as you can see by the photograph to the right. I'm sitting here listening to my neighbors shout in the new year while Denis is at work, so it's the perfect time to talk about statistics and show some graphs. (If any of you would like to create your own free graphs, I use ChartGo.)

I read 178 books in 2011; that's an increase of 13 books over 2010. Ten of those books were translated from other languages, and eight were eBooks, since I received a Nook Color as a Christmas gift. These eyes perused 54,588 pages of words and had a blast doing so. I'm also creeping up on my goal of reading 200 books in a year.

Let's break things down further using some of those fancy graphs.... 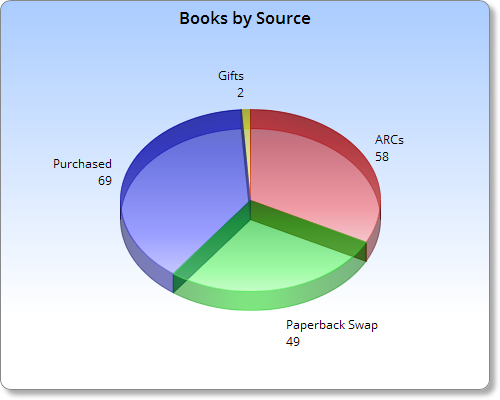 As you can tell from this pie chart, I don't receive many books as gifts, but that doesn't bother me. Gift cards are beautiful things! The percentage of gift books and purchased books scarcely changed from 2010, but the other categories had major shifts. In 2010, just under 40% of the books I read were from Paperback Swap as compared to this year's 28%. Advanced Reading Copies (ARCs) had the biggest change: 33% this year compared to 2010's 20%. (Yes, I am receiving-- and saying yes to-- more requests from publicists and authors!) 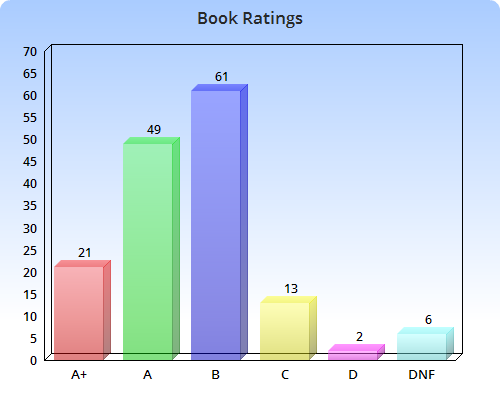 I thought I would show you that I do occasionally read other books besides mysteries, although you can see that the other genres are barely a blip on the screen. One category that didn't even show up in 2010 is Short Stories. 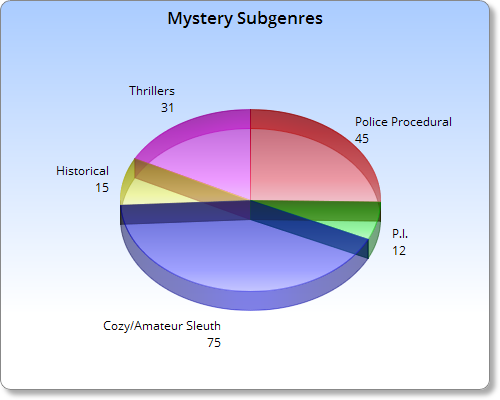 Since crime fiction is "my thing," here's the breakdown of the various subgenres that I read in 2011. The two that showed the largest increases over 2010 were Cozies and Thrillers. 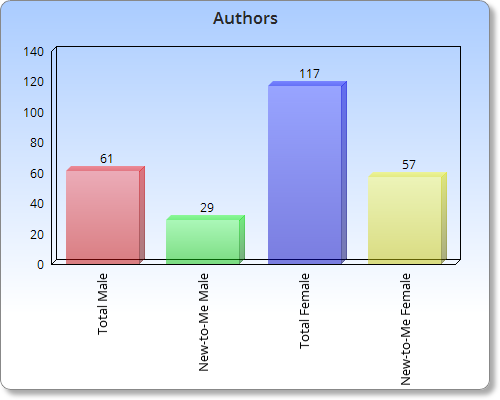 In 2009 I read mostly male authors and thought I should make a point of reading more female authors. According to 2010 figures, the number of male authors I read this year stayed very much the same, while I read twelve more female authors than I did in the previous year. I would like to see this even out a bit, but it's not something that I'm purposely setting out to change. I did read a total of 86 new-to-me authors, though! 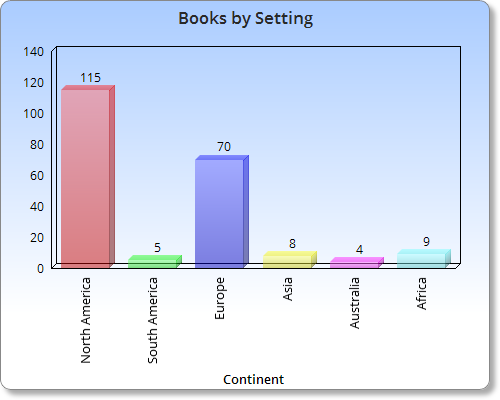 Since I'm an armchair traveler, I'm always interested in tracking the settings of the books I read. Compared to 2010, the continents of Australia, Europe and Asia showed little change. I spent less time in South America, and more time in North America and Africa. The European country I was most at home in? England, with a total of 34 books. The state here in the U.S. in which I was most at home? California, with a total of 19 books. New York had the largest increase, due to some cozy authors who've become favorites.

I would like to see myself reading less in the United States and more in other countries in 2012! 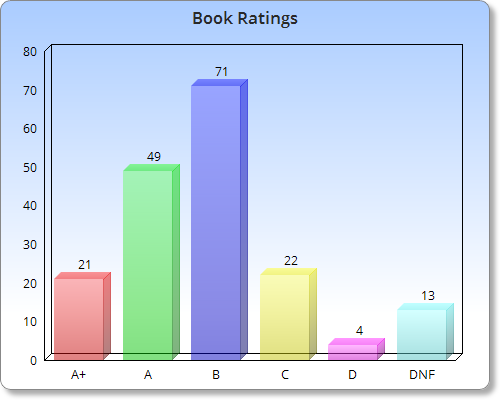 And here, of course, are the statistics for the book ratings I gave throughout the year. Compared to 2010, the A+ and A categories remained relatively unchanged, but the rest increased a bit. I didn't review any of the books I didn't finish this year. For the most part, I just wasn't in the mood for them. "Did Not Finish" normally means "bad," so I didn't think it was fair to the books or their authors that I publicly put that label on them.