The Rabbit Factory by Marshall Karp 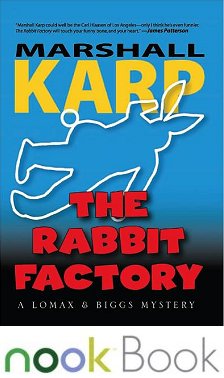 Rambunctious Rabbit, known as Rambo to his millions of fans, is an American icon and a theme park's biggest draw. When Eddie Elkins (the actor inside the rabbit suit) and two other theme park employees are murdered, Los Angeles Police Department detectives Mike Lomax and Terry Biggs must catch the killer before he can ruin an entertainment giant.

Karp's writing is hilarious as he introduces Lomax and Biggs. Lomax is the narrator, which is fitting since he claims that generations of his family suffer from diarrhea of the mouth. Karp gives him a conversational style that made Lomax feel as though he were my new best friend. See how he describes his mother:

She was one of the top stuntwomen of her day and worked in over two hundred movies, five of them with John Wayne. Every now and then, Joanie and I would be watching an old video, and some woman would fall down a flight of stairs, jump off a bridge, or get hit by a truck, and I'd smile and proudly say, "That's my Mom."

At first-- courtesy of Lomax's snappy wisecracks-- it would be easy to assume the two detectives are a modern-day version of the Keystone Cops, but you know what happens when you assume, don't you? Lomax's sense of humor hides a lot of pain. His wife died six months ago, and each month he reads one of the letters she left for him. His father is trying to get him dating again, and Lomax's brother is in deep trouble.

Once the first murder victim's background is revealed, the police waste precious time believing that it was a revenge crime, and it certainly doesn't help that Lamaar Studios' public relations people are trying to lock down all information about what's going on so the company shares won't take a hit on Wall Street. Events are fast-moving, however, and it doesn't take Lomax and Biggs long before they realize there's much more to this murder than first met the eye.

The satiric humor continues throughout the book, but Karp never lets it overshadow the investigation, which has plenty of twists, turns, and surprises. Well before I was finished, I stopped to see how many books there are in this series. I love Karp's humor, his cast of characters, and his devious plots. I want Lomax and Biggs to continue investigating crime for a good long time.