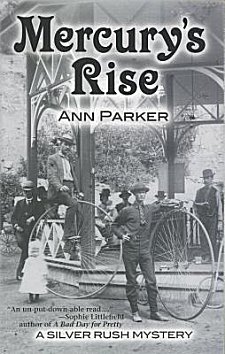 It's the summer of 1880, and many people diagnosed with consumption (tuberculosis), are arriving at Manitou, Colorado, to chase the elusive cure. Inez Stannert isn't one of them. Part-owner of the Silver Queen Saloon in Leadville, she's traveling to Manitou to reunite with her young son and her beloved sister.

The journey by stagecoach is far from pleasant, and it turns lethal when businessman Edward Pace dies in front of the others inside the coach. Once they've arrived in the hotel, Pace's distraught widow asks Inez to look into her husband's death. Since something about it didn't seem right to Inez, she agrees. She's barely begun when she starts to uncover all sorts of shady business deals involving those hoping to profit from miracle cures to the desperate and the dying. Although she'd rather do without it, Inez realizes that she's going to need the help of a man just recently returned from an eighteen-month unexplained absence-- her own husband.

I've been a fan of Ann Parker's "Silver Rush" mysteries since the very first one, Silver Lies. I love the mining towns of the Old West, so Leadville, Colorado, is a perfect setting for an historical mystery series. Parker can put so much detail in her books, and it never comes across as a history lesson, or as preaching. In fact, Mercury's Rise may make a few readers cringe due to the characters' attitudes and behaviors towards those ill with tuberculosis, but Parker knows not to infect her nineteenth-century characters with twenty-first-century knowledge.

Although the plot is an involving one that kept me guessing, and I loved the Old West setting, Ann Parker's characters are what keep me reading and keep me coming back for each new book. Inez Stannert is a strong, independent woman who isn't always right and who doesn't always make the right decisions. Like most humans, she does the best she can with what she's got. She has a husband to deal with whom she believed was dead. She has a young son who's been raised by her sister and doesn't recognize her. And she has infuriating, interfering family members from back East who want to dictate her life for her.

There's a lot of meat on the bones of a Silver Rush mystery by Ann Parker. I intend to savor each bite, and I hope you'll join me at the feast.