The Innocent by Taylor Stevens 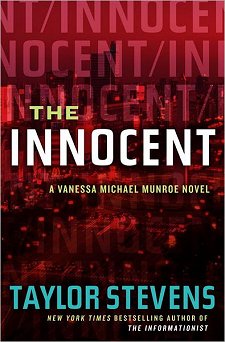 First Line: She moved in a crouch, blade between her teeth, all four limbs connected to the earth; cocked her head, listened, and then continued on again, through the undergrowth and past the body at her bare feet.

Once again Vanessa Michael Munroe has been asked to do the impossible. Hannah had been rescued from a religious cult called The Chosen once, but eight years ago, the five-year-old child was stolen back. For eight years a group of former childhood members of The Chosen have searched for Hannah, and now they've found her. The members of this group were raised within the cult, and they all escaped to make lives for themselves on the outside. Knowing what must be faced, they know that the only person they can trust to bring Hannah back and get her out of Argentina is Munroe.

Munroe is already on the edge of a breakdown. Horrendous nightmares have her self-medicating in order to get some sort of uninterrupted sleep. Those who know her best doubt that she should even attempt this rescue, but Munroe knows that she's the only hope this young girl has of a normal life. There's no way the group can pay the expenses of this operation, but that doesn't stop Vanessa Michael Munroe. She's known for a long time that there are many things on this earth more important than money.

Once again, Taylor Stevens delivers a lightning-paced thriller that doesn't stop. The story reads like an insider's view of life in a cult, and it should because the author grew up within one herself, but Stevens never lets herself become preachy or self-indulgent. Her take-no-prisoners main character sees to that.

Stevens' use of language-- in particular her use of verbs-- conveys the message that Vanessa Michael Munroe does not think like other people. Munroe's wired differently, and she is totally unpredictable. Combine such a character with an adrenaline-charged plot and an insider's-type view of the setting, and you've got a book that's almost impossible to put down.

If you like strong, intelligent, kick-ass heroines, you just have to meet Vanessa Michael Munroe!