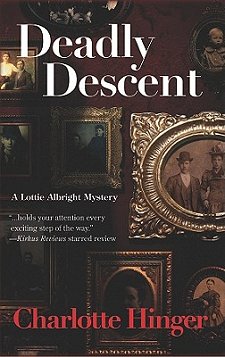 First Line: She was coming for me.

Lottie Albright, director of the Carleton County Historical Society in western Kansas, is busy editing the family stories of the county residents. She's also the campaign manager for Brian Hadley, who is trying to win a seat in the senate.

Although some of the residents have beliefs that Lottie does not agree with, their stories are historical documents, and she treats them accordingly. When Brian Hadley's mother, Fiona, comes to Lottie and insists that she suppress Fiona's sister's racist slant of their family history, Lottie disagrees-- even though the story could damage her candidate's chances in the coming election.  Soon thereafter, Fiona's sister is murdered, valuable documents are stolen, and anonymous letters begin arriving.

Believing that her work in historical investigation will help in finding clues to the identity of the killer, Lottie talks the local sheriff into letting her become a part-time deputy. The sheriff thinks it's a joke and gives her an old cold case to look at, and Lottie's husband thinks she's lost her mind, but both men soon learn that Lottie can tease the truth out of dusty old documents-- and the murderer doesn't like it one bit.

I keep forgetting how historically rich the state of Kansas is, but I think Charlotte Hinger has given my memory the jolt it needed to remember this fact. She deftly weaves bits of history into her narrative in a way that adds detail and texture in addition to bringing her cast of characters into sharper focus.

I was immediately drawn to the character of Lottie and to her family dynamics: a strong, cultured older husband who's a farmer and a veterinarian; a sophisticated twin sister who believes Lottie is wasted out in the hinterland; a step-daughter who loathes her. Having swiftly learned to care for Lottie as much as she cares for those around her, I actually enjoyed following all the emotional undercurrents that this family had swirling around it.

Another element that I thoroughly enjoyed was how Lottie was capable of reading old historical documents-- bills of sale, inventories and the like-- and find solid leads into her investigations into both the cold case and the present-day murder. Having read many of those same types of documents in connection with my own family history, I can attest to the fact that there is a lot to be learned from reading them-- although they do bore most people to tears.

The old cold case involving Herman Swenson was heartbreaking but rather easy to solve; however, the present-day case was not. I think it was due to the intricacies of the family trees and the fact that the generations and ages of various characters kept getting blurred in my mind.

Hinger's skill in characterization and in bringing historical investigation to life have me excited to read the next book in this series. I spent a lot of time as a teenager reading old newspapers, going through endless reels of microfilm, and taking census in old, forgotten cemeteries. Charlotte Hinger has reminded me of how much fun-- and how fascinating-- history can be... and how much influence it has on the present. I want more!