Scene of the Crime with Author Jasper Fforde

I've been a fan of author Jasper Fforde since I picked up a copy of The Eyre Affair from a table at the local Barnes & Noble and began to read.

That very first book in the Thursday Next series opened up an entirely new world to me. A world where people still travel by zeppelins, where it is possible to have a dodo as a pet, and-- most importantly-- a world where books are alive. They are difficult books to describe to those who haven't fallen under Fforde's spell of parallel worlds and bad puns.

As might be imagined from the uniqueness of these books, any interview with Jasper Fforde isn't going to be even remotely related to the status quo.  Before we go any further, I'd best give you the links you're used to seeing at the beginning of a Scene of the Crime interview:

After Mr. Fforde directed me to his FAQ page on his website and I read all 514 frequently asked questions scattered over a few pages, I rested my eyes. I also knew that he wasn't interested in doing a normal interview, even though some of my usual questions weren't on the FAQ list.

I had to come up with something different, and I did. What follows is an interview for readers who are familiar with Jasper Fforde's books. If you haven't read the books, don't let it put you off this unusual interview. Chances are that if you read through these wacky questions and answers, you'll be intrigued enough to pick up one of the books and read it. Also, if you read Fforde's answers with a bit of care, you'll see that he's secretly slipping in some observations and information and not just being totally silly.

Welcome to the world of Jasper Fforde!

Thursday Next, Jack Spratt and Eddie Russett have signed up for Saturday Night Mud Wrestling down at the local pub. Who wins... and how? 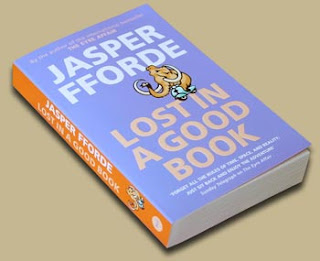 Thursday would win on brute force, Jack Spratt would win on guile and Eddie Russett would win by bending the rules to his advantage - or at least, have Tommo do it for him.

How did all the zombies and vampires manage to get loose and run amok in the Book World? Is it true that Goliath are behind it?

Goliath would love to have that sort of power within the Bookworld, but despite their best efforts, the most they have done is fire a few unmanned probes into books at random, and one quasi-success with the 'Austen Rover', a sort of Transfictional tour bus. No, the plethora of zombies in fiction is mostly due to a strong union and a lack of dress sense that many people are imbued with - it's easy work, too, just wandering around going 'Urrgh. yurr, geerg.' For their daily rate, I'd do the same. Vampires are another story - that's it. Vampires are another story.

Have you upgraded to the latest footnoterphone?

Yes, I use Android which runs under the 'Electric Sheep' network.

I've tracked down an active cell of Bowdlerizers. With all the budget cuts in Jurisfiction, I'd like to know what is the best way for me to infiltrate? 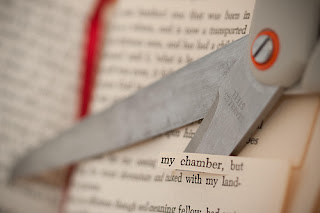 Probably the best way is to effect a supercilious air and declaim to anyone who will listen that 'fiction is in need of a tidy up' and then shout loudly and at great length about the 'ruder' aspects of John Buchanan's 'The Thirty-nine Steps', in particular where Richard Hannay is 'taken behind by a policeman', and that you will be the one to ensure this sort of smut does not reach the eyes of the public. That should do it.

With dictionaries scrambling to include all the latest mobile phone text speak, do you foresee a Mispeling pandemic?

What's the best way to butter up the Unitary Authority of Warrington Cat so I can get a job in the Great Library? 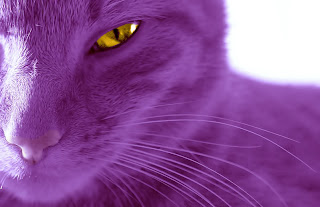 The best way to butter up the Cat formerly known as Cheshire is with ... butter. He loves it. Sort of like a cream loaf.

There's a wheel of X-14 cheese in my garden. I covered it with a wet blanket and called the CEA, but no one's shown up. It's been three days. What should I do?

Sell the cheese and pocket the cash. If you feel guilty about selling it on, take it to a lonely place in the middle of nowhere and abandon it. A deserted quarry will do, or the mid-atlantic trench. Be careful not to drop it as X-14 is so volatile that harsh knocks, a naked flame or even raised voices can set it off. Two ounces of X-14 has about the same explosive power of 2lbs of Cemtex. On NO ACCOUNT attempt to eat the cheese.

Thank you for spending this time with us, Mr. Fforde. We certainly appreciate it.

Don't forget to stop by next Monday when I'll be interviewing another of my favorite mystery writers here on Scene of the Crime.