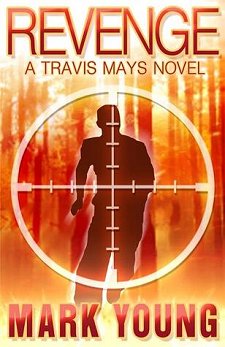 When an investigation goes horribly wrong, Travis Mays walks away from a highly successful law enforcement career and builds a new life. Now a professor of criminology at a university in Washington state, he likes to spend time in the cabin he built in the mountains of Idaho. Travis is even learning the fine art of kayaking from river guide Jessie White Eagle of the Nez Perce tribe. But when Jessie's brother goes missing and Travis is asked to help with the investigation, he finds himself in the crosshairs of a killer bent on revenge.

Many of you may take a look at my rating and think that I didn't care for the book. You would be wrong. I did. Although the book really doesn't have anything new in terms of plot, writing or characterization, it did hold my interest throughout. How? Because author Mark Young has given us multiple perpetrators with multiple objectives. I had my mind set on one bad guy, but the more pages I turned, the more I thought, "Now, wait a second...." Once my curiosity was fully engaged, I was hooked.

His stern struck a submerged rock, jamming the bow forward, burying him in a shallow grave of water. He fought to right himself, but the current corkscrewed him into its depths and he lost his balance. Roaring sheets of water buried him, pounding his head with icy fists. For what seemed like an eternity he remained trapped beneath the surface as near-freezing currents burned his skin.

A strong feature of the book is its setting in the mountains of Idaho, white water kayaking on its rivers, and the Nez Perce heritage of two secondary characters-- but I did feel that if the kayaking and Nez Perce heritage had been beefed up and had become more integral parts of the story, the book would have been even stronger.

Travis has a canine companion named Sam, which leads me to something that's almost becoming a pet peeve. Having had many canine companions of my own, I am attuned to how animals react to the people around me. When an animal in the book I'm reading reacts strangely to a new character, I immediately know that character is a bad guy. This undoubtedly isn't true for people who don't live with pets and aren't familiar with their ways, but it is to me and takes away some of the enjoyment of reading the book for me. On the other hand, Sam isn't portrayed as Super Dog, and that I do like.

When all is said and done, there is a lot to like about Revenge, and I'm looking forward to more stories about Travis Mays.