The Judas Field by Howard Bahr 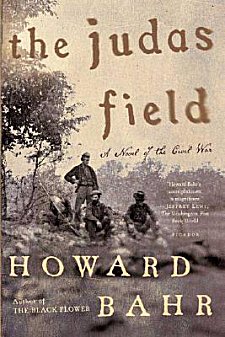 First Line: Cass Wakefield was born in a double-pen log cabin just at the break of day, and before he was twenty minutes old, he was almost thrown out with the bedclothes.

Since that rather inauspicious beginning, Cass Wakefield piloted steamboats, married, was a soldier, and became a widower. For the last twenty years, he's lived in Cumberland, Mississippi, and been a traveling salesman selling Colt revolvers.

Alison Sansing lost her father and brother in the war, and for the last twenty years, she's lived in that big old house in Cumberland alone. Having just been told by her doctor that she has cancer and hasn't long to live, the thing Alison fears most is being buried in the family cemetery alone. She asks Cass Wakefield to accompany her to Franklin, Tennessee-- where her father and brother died in battle-- to recover their bodies and bring them back to Cumberland to be buried at home.

Having fought in the Battle of Franklin himself, Cass has no desire whatsoever to return to the area, but he does... for Alison. Two friends who fought alongside Cass travel with the pair, and the closer they all get to Franklin, the more vivid their memories become.

I chose to read this book because my great-great-great-grandfather fought and died in the Battle of Franklin, and the fact that James Henry Brown's uniform was blue not gray, doesn't make a bit of difference. Bahr sets his scene very carefully. The pace felt like a steam locomotive pulling out of the station and gradually gaining speed. A profound sense of sadness, of sorrow, for all that was lost, for all the lives that were forever changed, permeates the book. At one point Alison asks what the fighting was like, and the response is one of the best I've ever read about the impossibility of telling someone who wasn't there what it's like to fight in the midst of the bloodbath of battle:

"If we live a thousand years, won't ever find a way to tell it." He coughed , and turned his head to spit. "In a battle, everything is wrong, nothing you ever learned is true anymore. And when you come out-- if you do-- you can't remember. You have to put it back together by the rules you know, and you end up with a lie. That's the best you can do, and when you tell it, it'll still be a lie."


The book's sadness turns to heartbreak as the men arrive in Franklin and try to locate where the bodies were buried so long ago. Yes, things have changed, but there are still roads, still buildings, that unleash an overwhelming tide of memory and loss. It's some of the best writing about war I've ever read because Bahr never once lets graphic carnage carry his story. It's a wonderful thing when a writer credits his readers with enough imagination and feeling to fill in the blanks for themselves.

Cass Wakefield is a beautifully realized character. One I will long remember, as I will remember The Judas Field. I come away from the book feeling that I now have a tiny idea of what my ancestor went through in that time and place so long ago.