The Informationist by Taylor Stevens 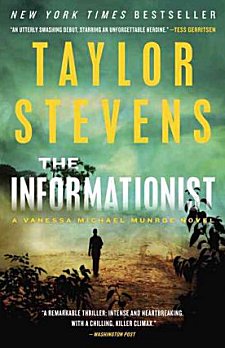 First Line: This is where he would die.

Corporations, heads of state, private clients-- anyone who can pay her rates-- want the kind of information that only Vanessa "Michael" Munroe can find. Born in central Africa, Munroe's past is as shadowy as the sources of her information.

Four years ago the daughter of a Texas oil billionaire vanished in Africa. He's never given up the search, and now he wants Munroe to try to find the young woman. It's not her usual line of work, but she can't resist the challenge. Pulled deep into the mystery, Munroe finds herself betrayed and left for dead-- but those who don't want her to succeed have no idea how powerful her determination and will to survive really are.

For those of you who read according to the "Fifty Page Rule," be forewarned: the first fifty pages of The Informationist are a bit slow going until Stevens has set her scene and hit her stride. Once that happens, hang on to your hats.

The political instability of Cameroon and Equatorial Guinea as well as the unpredictable character of Vanessa Munroe make for an explosive combination in this book. When everything and everyone is potentially lethal, the reader is never certain where the next threat is coming from.

Other than the slow beginning, the only thing that really bothered me was the identity of the bad guy. Whether we admit it or not, most readers of crime fiction and thrillers want a puzzle to pit their wits against. In most cases that puzzle is who done it, and the usual first question we armchair detectives ask ourselves is "Who stands to benefit the most from this death?" Perhaps because I'm such a cynical creature, I found the answer all too easy to discover.

After reading this book, I did a little research. For those of you who are not familiar with Taylor Stevens' background, you may want to visit her website. She's every bit as interesting as her fictional character. (In fact, I'd give Stevens the edge in the fascination quotient.) As for Vanessa Munroe, I discovered that many were pairing her with another unpredictable, highly intelligent, super secretive character-- Lisbeth Salander. I've read and loved all three of Stieg Larsson's books, but I did not pair his character with Taylor's as I read. I will admit that there are similarities, but one is not a copy of the other. I wouldn't want to have either one of these women infuriated with me; there's no hole deep enough to hide from Lisbeth or Vanessa!

As a lover of exotic locations and strong, unpredictable characters, I recommend this book. I look forward to reading the next Vanessa "Michael" Munroe adventure.