In the Bleak Midwinter by Julia Spencer-Fleming 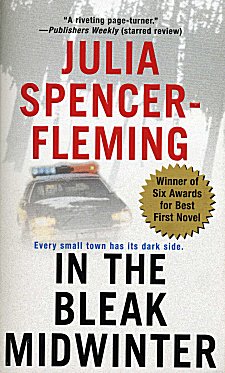 First Line: It was one hell of a night to throw away a baby.

There's a new priest at St. Alban's Episcopal Church in Miller's Kill, New York, and there are several parish members who believe the newcomer isn't a very good fit. Not only is Clare Fergusson a female, she's also an ex-Army helicopter pilot. When Clare finds a newborn baby left on the church doorstep, she meets the town police chief, Russ Van Alstyne, who's the ex-Army good shepherd of his Miller's Kill flock. Together, their search for the baby's mother leads them into a world of secrets, a world of trouble... and a world of temptation.

When this book was published, it made quite a noise-- being the first to win the Agatha Award, the Malice Domestic Award, the Anthony Award, the Dilys Award, the Barry Award, and the Macavity Award for Best First Novel. This is the first time this has ever happened, and the fanfare was tremendous. As in most cases when a book is praised from every rooftop, I merely lowered my head a bit and kept on reading my books. Massive praise makes me leary; however, when I was doing research recently, this book and its author reappeared on my radar, and I thought the time was right to see what all the shouting was about.

There's one good thing about coming late to the party: I can make an entrance and perhaps persuade other no-shows that they may want to dust off their invitations and join in the fun.

From the first line and from the first meeting of the two main characters, I found myself climbing up on the bandwagon. The December weather in the Adirondack Mountains did make me glad I was reading the book in sunny Phoenix, but In the Bleak Midwinter is all about Clare Fergusson and Russ Van Alstyne, two of the best characters I've come across in in all my reading this year.

I felt more in tune with Van Alstyne-- cynical and all too aware of the evil humans are capable of. I have to admit that Clare had a tendency to drive me nuts in the how-can-a-smart-person-be-so-darned-dumb sort of way. Yes, she's not used to the sort of weather Miller's Kill is prone to, but how many times does she have to risk frostbite before she gets a pair of decent boots... and how many times does she have to skid off the road before she gets a vehicle that can deal with snow?

I do not care for "femjep"-- those times when a female character knowingly puts herself in danger for no real reason. Clare does this in her silly boots and even sillier MG, and the only thing that saved that portion of the book for me was how she got herself out of the mess.

These two characters could have me going on forever, but I will show restraint. The way I'm waxing poetic over Clare and Russ, you're probably wondering why I didn't give this book my highest rating. There are two reasons: Clare's mule-headed meteorological stupidity and the fact that it was rather easy to deduce whodunit and why.

Other than that, I'll have you know that I already have the next five books in the series on my to-be-read shelves-- with the most recent firmly ensconced on my wishlist. I will admit to being a bit nervous, though. My husband Denis has also read and enjoyed In the Bleak Midwinter and moved right along to A Fountain Filled With Blood. We've talked about the first book, so when Denis told me what Clare's new car is in the second book, all I could do was groan. Clare, don't do this to me!

Isn't it grand when you find characters that make you talk to yourself?