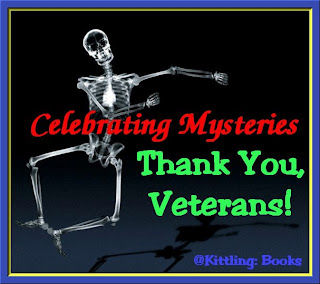 November is Military Family Appreciation Month, so I thought I would focus on veterans from all branches of military service.

I believed that the simplest way to divvy up all the candidates would be by branch of service, and it would've been if about three dozen series characters hadn't been listed as "Vietnam vet." Okay, that's nice, the character served in Vietnam-- but which branch of the military was he in???

I refused to get stressed out about it and went ahead with my original groupings. If you've been following my blog for any length of time, you should find it easy to deduce which branch of the military I'd begin with, and if you said "Navy," you'd be correct. Let's see which authors I'm going to spotlight this week!

Suzanne Brockmann is a bestselling author who's widely recognized as one of the leading voices in romantic suspense. She's also a member of the American Civil Liberties Union, the Human Rights Campaign, and MassEquality.

Suzanne has written sixteen books in the Troubleshooter series which features Navy SEALs and civilian counterterrorists. The first three books in the series are: The Unsung Hero (2000), The Defiant Hero (2001), and Over the Edge (2001). 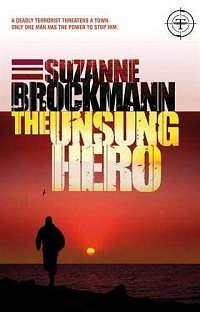 Synopsis of The Unsung Hero:

After a near-fatal head injury, navy SEAL lieutenant Tom Paoletti catches a terrifying glimpse of an international terrorist in his New England hometown. When he calls for help, the navy dismisses the danger as injury-induced imaginings. In a desperate, last-ditch effort to prevent disaster, Tom creates his own makeshift counterterrorist team, assembling his most loyal officers, two elderly war veterans, a couple of misfit teenagers, and Dr. Kelly Ashton-the sweet "girl next door" who has grown into a remarkable woman. The town's infamous bad boy, Tom has always longed for Kelly. Now he has one final chance for happiness, one last chance to win her heart, and one desperate chance to save the day....

I really like the sound of the team Tom puts together, don't you? 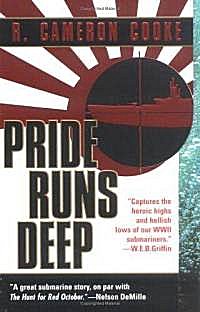 Publishers Weekly has this to say about Pride Runs Deep:

With its brisk pacing and wealth of military detail, Cooke's much-heralded debut lives up to the hype. A year after the attack on Pearl Harbor, Lt. Cmdr. Jack Tremain is about to leave Hawaii and join his family in the States when he's tapped to take command of the USS Mackerel. The submarine's crew is demoralized after losing three of its members on its last patrol, and it's Tremain's job to turn things around. Soon after the ensemble cast is introduced, Tremain leads the Mackerel into battle against a Japanese escort ship. Back on shore, Tremain is offered a pass home, but he opts to stay, sensing that the Mackerel (to which he has become attached) is about to be sent on a suicide mission. Cooke, who served on a nuclear sub for seven years, vividly conveys the fear and claustrophobia of men trapped in a confined space. The sometimes turbulent relationships among the crew effectively counterpoint the dangers waiting just outside. Tremain proves himself an admirable hero in the tradition of the finest historical naval fiction.

Cathie John is the husband and wife writing team of John and Cathie Celestri. John, a native of Brooklyn, New York, has been a cartoon animator for the past 25 years. He has worked on over fifty feature-length films, half-hour TV specials and videos, having learned the basics of classical animation on the job from old Popeye and Mighty Mouse animators.

Cathie is originally from Toronto, Canada, where she studied music and worked in advertising. She also attended the culinary program at the Rhode Island School of Design and worked in the restaurant and catering industry in Providence, Rl.

Together they write the Kate Cavanaugh culinary mystery series, and  an almost polar opposite series featuring Nick Cavanaugh, a Navy vet and Fleet Boxing Champ, who lives in 1940s Newport, Kentucky. The two books in Nick's series are: Little Mexico (2000) and In the Name of the Father (2003). 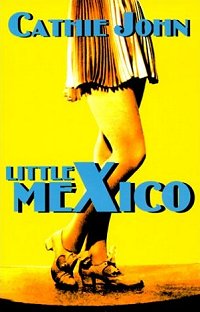 Booklist says this about Little Mexico:

Based on true events and real-life people, John's novel tells the story of a seedy pre-Vegas gambling town in the foothills of Newport, Kentucky, just across the Ohio River from Cincinnati. The fictional Jules family owns the Oasis Club, a legitimate nightclub with an illegitimate casino in the back. Club owner Carl Jules sees himself as a respectable businessman, and he refuses to let the Cleveland Syndicate "buy him out," code for intimidating him into handing over the club, something that has already happened to another independent casino operator. When Carl is found shot after closing up one night, the suspects are plentiful: Could his beloved wife be after his cash? Could his hotheaded son be too eager to move up the ladder? Could it be the most obvious, the syndicate itself? Told from various perspectives, including that of the young Jules' best friend, an honest cop (a Newport anomaly), and a hooker, Little Mexico's combination of real-life gangsters and an engaging plot makes for entertaining reading.

Brad Thor's wife asked him on their honeymoon what he would regret on his deathbed never having done. "Writing a novel and getting it published" was his answer, and with his wife's help, within a year, his first book was written.

Thor has now written ten books in a series featuring Scot Harvath, an ex-Navy SEAL, Secret Service agent, and counter-terrorism operative who works all over the world. 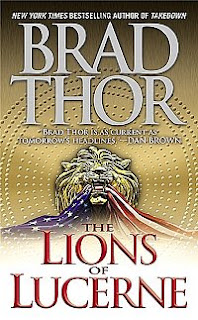 Here is a synopsis of The Lions of Lucerne:

On the snow-covered slopes of Utah, the President of the United States has been kidnapped and his Secret Service detail massacred. Only one agent has survived—ex-Navy SEAL Scot Harvath. He doesn’t buy the official line that Middle Eastern terrorists are behind the attack and begins his own campaign to find the truth and exact revenge. But now, framed for murder by a sinister cabal, Harvath takes his fight to the towering mountains of Switzerland—and joins forces with beautiful Claudia Mueller of the Swiss Federal Attorney’s Office. Together they must brave the subzero temperatures and sheer heights of treacherous Mount Pilatus—where their only chance for survival lies inside the den of the most lethal team of professional killers the world has ever known. . . .

I hope I've managed to whet your appetite with a title or two. If I haven't, there is one other angle to consider: is there a man in your life who enjoys reading fiction? One of these books may be right down his alley!

Join me next weekend when I'll be talking about another branch of "military mysteries"!
by Cathy at Saturday, November 05, 2011