The Boy in the Suitcase by Lene Kaaberbøl and Agnete Friis 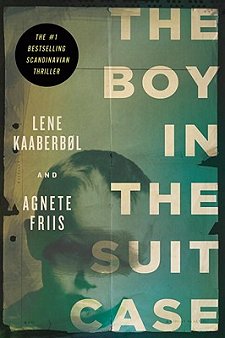 First Line: Holding the glass door open with her hip, she dragged the suitcase into the stairwell leading down to the underground parking lot.

Nina Borg knows she should say no. Just because her friend Karin has asked doesn't mean that Nina should drop everything to help her. But Nina's been a compulsive "do-gooder" her entire life. If someone asks her for help, she helps.

Karin has given Nina the key to a public locker in the Copenhagen train station. Inside the locker is a suitcase. Inside the suitcase is a three-year-old boy. The boy is naked and drugged, but alive. The child raises a million questions in Nina's mind. She may be a compulsive do-gooder, but she is wise to the ways of the world. The best choice for the boy may not be to turn him over to the authorities.

While Nina is trying to answer all the questions swarming in her mind, she learns that Karin has been brutally murdered, and she realizes that the boy's life and her own are in grave danger. Somehow, some way, Nina must care for the boy, learn his identity and where he belongs-- and stay out of the reach of a killer.

The first fifty pages of this book moved rather slowly as the authors set their stage. Those pages consisted of short chapters from the points of view of several seemingly unconnected characters, and until I could get a fix on these people and keep them from hopping all over my mind, I'll admit that I was a bit puzzled. If you read this book (and I hope that you do) and you find yourself in the same situation, please please please do what I did: Hang in there!

After those initial pages, everything fell into place-- and I fell under Nina Borg's spell. This woman is far from perfect. Her urge to do good has meant that she often neglects her own family, and her husband has reached the limits of his patience. But when someone like innocent, trusting little Mikas has been stolen for heaven knows what purpose, Nina is utterly incapable of turning her back. She has yet to see a truly happy ending, but she is determined to do everything in her power to see that Mikas's story will have one.

The Boy in the Suitcase could so easily have been another gruesome tale of child trafficking and pedophilia, but it's not. Like Nina, my mind was frantically trying to work out what had happened to Mikas and why. When I realized that the boy had not been stolen for the usual reasons, my unease grew-- and that creepy feeling kept bubbling away just beneath the surface because the authors made very good use of the murderer who's trying to get the boy back and killing anyone who gets in his way. I never knew when that psycho was going to pop out of the woodwork!

This is a highly emotional story of secrets and bad choices. This is a story about terrified, desperate women who've refused to look at the choices they've made until they were absolutely forced to do so. Most of all, it's the story of one brave woman who saw evil being done and refused to look the other way.