Scene of the Crime with Author Jennie Bentley!

This week on Scene of the Crime, my guest is Jennie Bentley, author of the Do-It-Yourself mysteries featuring Avery Baker, a New York textile designer turned home renovator, and her boyfriend and business partner, handyman Derek Ellis. I discovered this series earlier this year, and I'm really looking forward to reading more of Avery and Derek's adventures.

Now a full-time writer, Jenna is a former realtor and renovator who lives in Nashville, Tennessee. Jenna, a native Norwegian, has been in the U.S. for more than twenty years and has managed to retain her native accent. [My husband immigrated ten years ago and hasn't gotten rid of his either, thank goodness!]

Jenna also writes under the name Jenna Bennett. If you'd like more information about the author and her books, here are some links for you:

Speaking of learning more about Jennie, let's get to the interview, shall we? 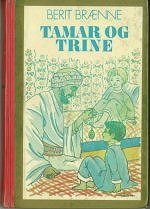 I can remember my parents reading to me long before I could read to myself. Growing up in Europe, though, the books I read were different from a lot of the books available in the US. I never even heard of Goodnight Moon until I had children of my own. I was weaned on the likes of Astrid Lindgren, Enid Blyton, and Lisbeth Werner.

I think the book – or books, there were three – that had the biggest impact on me when I was quite small, was probably Tamar and Trine by a Norwegian author named Berit Brænne. Trine was a little Norwegian girl who lived on a big ship of which her father was the captain, and the family sailed all around the world. In Morocco, in the first book, Trine met a little boy named Tamar, who was homeless, parentless, and sick, and he ended up becoming her brother. In later books, Tamar and Trine got a sister named Tai-Mi from some Asian country they visited, and a brother named Tom from the slums of some big American city. It’s been a while, so I can’t remember all the details, but I remember the way the books made me feel. They were a wonderful introduction to tolerance and openmindedness, and I think they’re probably the reason why that particular dynamic – relationships across races and cultures – have always been interesting to me, both as a writer and a person.

Who has free time? Between writing three books a year, helping my husband in his real estate business, and taking care of two kids and six pets, I’m lucky if I get the laundry done. I used to read more than I do now, but I still manage a few books a month. Once in a while, I’ll knit something. I like to travel. And I watch Criminal Minds. One hour of TV once a week?

I grew up in Oslo, the capital of Norway, and there’s a lot to see and do. The National Gallery, the Edvard Munch Museum, the royal palace, the Viking Ship Museum, Gustav Vigeland Sculpture Park, the medieval fortress guarding the harbor, built in 1299....  My favorite thing – as long as the weather is good – is to take a fjord cruise. (No fun if it’s cold and rainy, or worse, snowy. But on a nice sunny day, it’s lovely.) I always make sure I get out on the water, and onto one of the small islands, where there’s the ruins of a medieval monastery – supposedly haunted – as well as a battery of WWI cannons and an incredible view back into the city.

Ava Gardner. My husband always had a thing for her. If you’re looking for someone alive, I suppose Catherine Zeta-Jones would do. No, we don’t look anything alike, but that’s the point, right? I’d also use some poetic license in writing the screenplay, since my life hasn’t been all that exciting.

Elizabeth Peters’s Amelia Peabody is rather a lot of fun. And Stephanie Plum is usually good for a laugh (although I wish she’d settle down with Joe Morelli and leave Ranger for me). Eve Dallas kicks butt. And I like Clare Fergusson, from Julia Spencer-Fleming’s mystery series, a lot. For that matter, I like her boyfriend, Russ Van Alstyne, too. Both of them are very well conceived, flawed yet likeable, well-written characters. And who doesn’t like Sam Vimes? 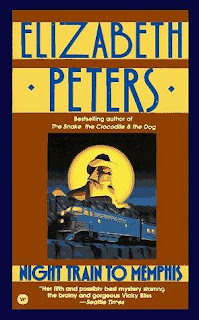 There are so many. The Harry Potter books, because they changed the reading habits of a whole generation. Jennifer Crusie’s Bet Me, which is lovely, and poignant, and hysterically funny at the same time, and one of the best love stories I’ve ever read. Thud! Many of Terry Pratchett’s books, come to think of it, because of the way he has of using the insanity of the Discworld as a mirror in which we can see ourselves.

Elizabeth Peters’s Night Train to Memphis. The first half of that book is brilliant, in that you think you know what’s going on and everything makes perfect sense from the protagonist’s POV. But then when you realize she’s wrong, and you go back and read it over with that realization, it still makes perfect sense. The intricacy of the writing in that particular volume of the Vicky Bliss series is astonishing. I wish I could do it, but I doubt I’ll ever get to that point.

I guess I probably went out to dinner when I got the news, since I’ll use pretty much any excuse not to have to cook. I don’t remember thinking it was all that big of a deal, to be honest. As for what I did the first time I saw one of my books on the shelf, I took a picture of it. I didn’t jump up and down or squeee or anything. And then I made my husband take me to lunch. I do remember that part.

Nothing unusual ever happens to me. Everyone’s been nice, no one’s been rude or asked inappropriate questions. People tell me about all the wonderful – and sometimes not so wonderful – things that happen to them at signings, but mine have all been straight-forward. Sorry.

eBooks rock. I love eBooks. I usually prefer to read ‘real’ books – I like the feel and smell of paper – but I love how eBooks are cheaper and weigh a lot less. Can’t beat an eReader for traveling light. As a writer, I really appreciate the fact that people who don’t buy other books are gobbling up eBooks. Anything that makes someone read is a good thing. And they’re a God-send for authors everywhere in that they allow us to re-publish our out-of-print backlist or any of our work that doesn’t fit the requirements of traditional publishing, something I seem to be guilty of doing frequently. I tend to want to cross genres a lot, and to try to push the envelope, and that makes it harder to publish the traditional way. I have the first four books in a series of self-published mysteries out there right now, with a fifth coming before Christmas, and it’s a thrill to be able to see the books of my heart – the books that didn’t sell to a traditional publisher – have a chance to come into their own and find a readership.

My traditionally published books are also available in electronic versions, of course, and were running at about 40% of total sales last time I checked. 40% electronic, 60% print. But that was the second half of last year; by now I’m sure the numbers have changed. I don’t see the eBook revolution as a threat, though; I’m much more apt to see it as a wonderful opportunity and an exciting development. And really, books are about content, aren’t they? The book is the words and the story, not the paper or ink. I’m thrilled whenever someone chooses to read my books, or any books, and I couldn’t care less in which format they choose to read them. The story’s the thing, and the story is the same whether it arrives on paper, on screen, or in audio.

I guess the simple answer is that I have no idea how eBooks will affect me as a published author. I guess I hope they’ll make people read more and that we’ll all, in return, get to write more.


Thank you so much for spending this time with us, Jennie. We appreciate being able to learn a little more about you. May your book sales do nothing but increase!

Don't forget to stop by next Monday for an interview with another of my favorite authors!