New Holiday Mysteries to Get You in the Mood 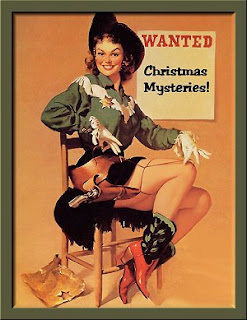 I know it's not even Halloween yet, but then I've never been much for trick or treat. Besides, if you like to read certain types of books at certain times of the year, it's always better to plan ahead.

That's exactly what I'm trying to do here. Today there are five brand-new Christmas-themed mysteries hitting the shelves, and I'd like to give you the lo-down so you can get your hands on the ones you want.

When the holiday season arrives, I'm going to be able to curl up on the daybed by the fireplace surrounded by Christmas trees, armed with a couple of black bottom cupcakes, a cup of hot chocolate laced with a bit of peppermint schnapps, and my holiday mystery of choice. Join me, won't you? 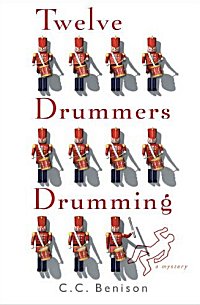 Synopsis: "Introducing Father Tom Christmas, the wise, warmhearted new vicar of a picturesque English village that seems to be a haven of peace. But appearances can be very deceiving. . . .

Thornford Regis has never been lovelier: larks on the wing, lilacs in bloom, and the May Fayre in full swing. But inside the empty village hall, the huge Japanese o-daiko drum that’s featured in the festivities has been viciously sliced open—and curled up inside is the bludgeoned body of Sybella Parry, the beautiful nineteen-year-old daughter of the choir director.

That she was too young to die, everyone agrees. But did Sybella’s apparent affinity for Goth and the black arts, and her rumored drug use, attract a shady element that led to her distressing demise?

Father Tom Christmas, still haunted by the tragedy that has left him a widower and his nine-year-old daughter motherless, soon realizes that this idyllic village is not the refuge he’d hoped for. He also comes to a disturbing conclusion: Sybella’s killer must be one of his parishioners. No one is above suspicion—not Sebastian John, Father Tom’s deeply reserved verger, nor Mitsuko Drewe, a local artist, nor irritable Colonel Northmore, survivor of a World War II prison camp. One by one, infidelity, theft, and intrigue are exposed. And over all, like an approaching storm, hangs the long-unsolved mystery of a sudden disappearance, one that brought Father Tom to a picture-perfect place to live—or die. 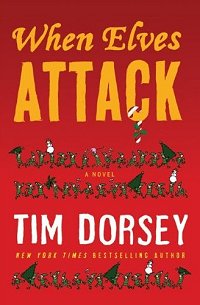 It’s ho, ho, ho time in this hilarious and wacky Florida holiday tale, featuring bighearted psychopath Serge Storms and his sidekick, Coleman. Like Santa, Serge knows who’s been naughty and who’s been nice. Few can give with the generosity and creativity of Serge, and as December 24 rolls around, he is filling up the Serge sleigh with an unforgettable bag of presents.

But before that, it’s all a big free-range Christmas office party, where Serge will be spreading his special cheer. And there’s that last-minute go-for-broke spree at the mall (just beware of those attacking elves—they bite). While you’re there, skip the lame photo on Santa’s lap—Serge will give you a lap ride you’ll never forget. As for that addled elf Coleman, there’s nothing like a white Christmas. Let it snow!

So grab a six-pack, spike the eggnog, and hit the dunes on the beach as Serge and Coleman roast some nuts on an open fire and prove that reindeer really do know how to fly!" 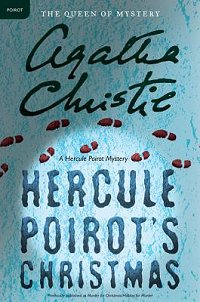 Synopsis: "Christmas Eve, and the Lee family’s reunion is shattered by a deafening crash of furniture and a high-pitched wailing scream. Upstairs, the tyrannical Simeon Lee lies dead in a pool of blood, his throat slashed.

When Hercule Poirot offers to assist, he finds an atmosphere not of mourning but of mutual suspicion. It seems everyone had their own reason to hate the old man. . . ." 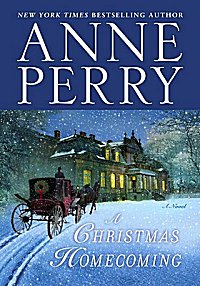 Synopsis: "In A Christmas Homecoming, a familiar face from the Charlotte and Thomas Pitt novels—Charlotte’s mother, Caroline—travels with her young husband, Joshua Fielding, and his theatrical troupe to Whitby, the Yorkshire fishing village where Dracula the vampire first touched English soil in the sensational novel named after him. Joshua has arranged to produce a stage adaptation of Dracula by the daughter of Whitby millionaire Charles Netheridge during the Christmas holiday, but after the disastrous first read-through of her amateurish script, only the fact that the company is depending on Netheridge’s financial backing for their spring tour keeps them at work.

As tempers flare and wind and snow swirl around Netheridge’s lonely hilltop mansion, a black-cloaked stranger emerges from the storm—an eerily opportune arrival, for this enigmatic figure, one Anton Ballin, turns out to be a theatrical genius. At the same time, a brooding evil makes itself felt. Instead of the theatrical triumph that Netheridge desired for his daughter, there is murder—shocking and terrifying.

Anne Perry’s ninth Christmas novel keeps us poised on a razor’s edge of suspense, hypnotized by a story in which the heartwarming power of goodness is challenged by the seductive power of inner darkness. In the end, A Christmas Homecoming lifts the spirit and rejoices the heart." 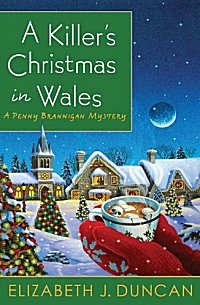 Synopsis: "As the townsfolk of the Welsh valley town of Llanelen settle in for the snowiest winter in twenty-five years, an American stranger arrives. Harry Saunders charms the ladies, one of them in particular: Evelyn Lloyd, the town’s former postmistress, who was left comfortably off after the death of her husband. After Mrs. Lloyd invests a good deal of money with him, Harry goes missing, as does her money. His body is soon discovered outside the walls of Conwy Castle, and Mrs. Lloyd is implicated in the murder.


Although Penny Brannigan and her business partner, Victoria Hopkirk, are busy overseeing the grand opening of their new spa, that doesn’t stop Mrs. Lloyd from desperately seeking Penny’s help to prove her innocence. It’s quite possible that Harry made other enemies while in Llanelen and Penny’s investigation unfolds while she juggles her work at the spa, her growing relationship with Detective Inspector Davies, and the Christmas window competition that she signed up to judge.


I don't know which one of these I want to curl up with first-- how about you?

Pssst... want some peppermint schnapps in that mug of hot chocolate?