The Devil's Ribbon by D.E. Meredith 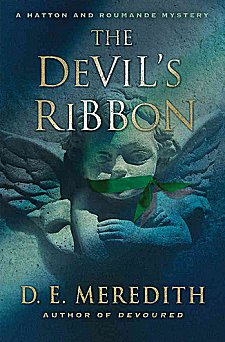 First Line: Nothing but shadows and an eerie stillness in the heat of a simmering night as a figure stoops under a lintel and makes his way quickly, through a labyrinth of alleys, before finding Berry Street and heading north along the Farringdon Road.

It is July, 1858, and Londoners are suffering through the hottest summer on record. Forensic scientist Adolphus Hatton and his assistant Albert Roumande have a morgue filled with Irish cholera victims. A decade ago these people were forced into the worst of London's slums because of the horrific famine. The Irish in London may be a race apart, but they are a close knit people and very politically aware.

A series of seemingly unconnected murders occur in which all the victims are linked by a Fenian green ribbon that's left on the corpses. Hatton and Roumande are called in to help with Scotland Yard's investigation, and Hatton finds himself attracted to the beautiful widow of one of the murder victims. As agitators work the streets and the body count rises, Hatton and Roumande must race to find answers before London is torn apart.

I'm happy to say that I found this book to be a vast improvement over the first book in the series, Devoured. The plot is much clearer and the pacing much smoother. There is also more forensic detail in this book, which was so lacking in the first.  Meredith includes many details of what the Irish had to endure during the Famine, both in Ireland and in London, and it adds great depth to the story.

Adolphus Hatton is given a past in this book, and he becomes a much better defined character, even though much of this is done through the convention of falling in love with the widow of one of the victims. Hopefully we'll see more of the very interesting Albert Roumande's backstory in future books as well.

The only real letdown in the book is that the killer was extremely easy to guess. I don't know if the author intended to do this in an attempt to lead readers astray with another character, but it wasn't successful.

All in all, I'm glad that I decided to overlook the disappointment I found in the first book and to focus on the promise that was there. In The Devil's Ribbon, I see the real beginning of a very promising historical mystery series.