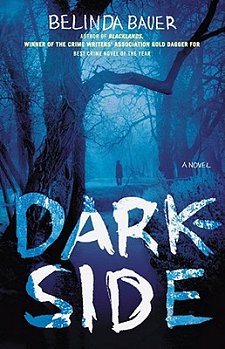 First Line: The sounds of the hospital came back to Lucy muffled and from far away.

It is midwinter, and with the small English village of Shipcott on the verge of being cut off by unending snow, everyone is shocked by the murder of an elderly woman lying defenseless in her bed.

Young police constable Jonas Holly is deemed too inexperienced to handle the investigation, so Detective Chief Inspector John Marvel is brought in from the city to handle things. The abrasive DCI seems to be good for nothing but cruel jokes and insufferable cosmopolitan condescension, but Jonas does his best to stay out of the way and ignore the slights.

Then a series of sinister anonymous notes puts him right back in the middle of the case. Jonas believes someone in the village is laughing at him. Someone blames him for the old woman's death. Someone thinks he's not doing his job correctly... and seems to know every move he makes.

Bauer's first book, Blacklands, is one of the most memorable novels I read last year. With her second she once again proves her skill at crafting a book that shouldn't be read after dark. Like its predecessor, Darkside will have you listening for creaking floorboards and feeling the hairs stand up on the back of your neck.

Each character in Darkside is limned in mercury, and as each characterization joins the beads of previous ones, the reader's unease grows. Jonas Holly cares deeply about protecting the people of the villages he patrols, but more than anything he wants to save his beautiful young wife, Lucy, who is slowly succumbing to the ravages of multiple sclerosis. Lucy entertains herself with horror movies and tries her best to stay strong for her terrified husband. DCI Marvel is getting nowhere with his investigation; his condescension has done an excellent job of closing village doors in his face. Marvel begins drinking too much and shouting at everyone until he's universally hated.

Bauer is masterful at bending characterization and atmosphere to her will. However, the more I read, the more a nagging feeling refused to go away. When I reached the end of the novel, I wasn't shocked. That nagging feeling of mine was a hunch proven correct. Instead of a "Grand Slam" ending that left me at a loss for words, I felt slightly manipulated. The story is brilliantly plotted, but never once did I lose myself in it. Instead of feeling the writer's power as each page turned, my mind was analyzing and deducing as the paragraphs flowed by.

Will that tiny disappointment keep me from reading future books by Belinda Bauer? Of course not! Darkside is a beautifully written, enjoyable novel, and I have a feeling that her next book will knock my socks off.