The Darkness by Bill Kirton 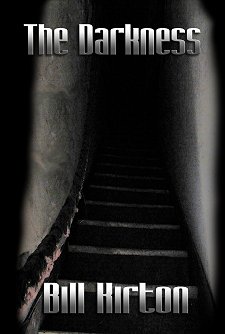 First Line: Tommy Davidson was in his study, kneeling on a special praying chair which he and his wife had been given by some French friends in Rennes.

There haven't been many joyful moments in Rhona Kirk's life. An endless procession of her drunken mother's boyfriends almost inevitably led to the young woman's brutal rape. The rapist never went to prison, and now other men in Rhona's life are beginning to disappear.

Tommy Davidson's wife and daughter were killed when their vehicle was struck by a drunk driver. The drunk driver hired himself a good lawyer and walked away a free man. Unable to face life alone, Davidson commits suicide, and his brother Andrew is left to face a world he believes is utterly devoid of justice. It is a world in which he does not want to live. Is there any way he can possibly make a difference?

When villains begin to disappear from the streets of Cairnburgh, Scotland, jokes are made down at the police station. Detective Chief Inspector Jack Carston joins in, and why not? All too often these missing men have committed their crimes and then been allowed to walk away because of the machinations of their lawyers. If a vigilante is patrolling the city's streets, more power to him. May he succeed where the police can't.

At least, that's what Carston thinks at the beginning. When his thoughts begin to mirror the resident Neanderthal, Spurle's, Jack takes stock. Just how much do his thoughts influence his actions, his words, his behavior?

This third Jack Carston mystery is a look into the heart of vigilantism. In a world where the criminal justice system seems to work only for the criminals, is there any real harm in letting vigilantes take the law into their own hands to get vicious killers and rapists off the streets? Is there any real harm in the police letting vigilantes take care of business when their own hands seem to be tied by the courts of law?

Kirton tells an engrossing story as he examines these questions. His main character, DCI Jack Carston, is a happily married man who thinks nothing of being his wife's dress mannequin whenever she needs to pin up a hem or check the hang of a sleeve. By having Carston compare himself to someone like Spurle-- a complete misanthrope who wouldn't know political correctness if it had his gonads in a vise-- we understand how worried Carston is, not only by his own thoughts, but by what's happening on the streets of his city.

While Carston and his men are trying to find clues and piece them together, we witness the birth and development of a vigilante in Andrew Davidson. The Darkness is never about who done it; it's all about why it was done. In reading alternating chapters written by Davidson, we can see his transformation from an angry, grieving brother into something ugly and frightening that even Davidson himself doesn't recognize.

Once again, Bill Kirton delivers a well-told tale wrapped in several thought-provoking questions. Although The Darkness stands well on its own, I'd suggest you get to know Jack Carston by reading the first book in the series, Material Evidence. Carston is one of my favorite coppers.