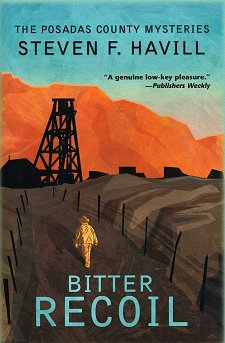 First Line: I stopped at the top of the saddleback and looked down through the pines.

It's not often that Posadas County Undersheriff Bill Gastner takes a vacation, but he figures he's got one coming now. (Probably has something to do with his age and the quadruple bypass surgery he recently survived.) Gastner loads up his truck and heads for the mountains of northern New Mexico to visit his former detective, Estelle Reyes, who's upholding the law in San Estevan County.

Parked in a campground, Gastner's sleep is interrupted by sirens, and he suddenly finds himself reunited with Reyes and her new husband over the body of a young pregnant woman. At first she's thought to be a hit-and-run victim, but the autopsy reveals the truth: this young woman had been thrown from a moving vehicle after a rape attempt. Gastner tries his best to stay on vacation and off the case, but when four more deaths occur, there's no time for a vacation for this recuperating lawman.

Steven Havill has a deceptively smooth and easy style that had me hooked before I knew what was happening. His main character, Bill Gastner, is self-deprecating, funny, and absolutely relentless when it comes to hunting down the bad guys. Due to his age and that bypass surgery, he's also a very vulnerable character, which makes him a rare bird in the crime fiction world.

The other characters hold their own against him-- especially Estelle-- but it's Bill's show in the beautiful mountains of New Mexico. And those mountains remind me: Havill really pushed two of my buttons with this book. Mine shafts and forest fires are going to get my attention every time, and Bitter Recoil was no exception. Havill writes a lean, spare mystery filled with wonderful characters, a strong sense of place, and plenty of action.

This is a mystery series that my husband and I both enjoy, and it's not necessary to read the first book in the series to be able to follow what's going on in this second one. If you've caught up with Sheriff Walt Longmire and Joe Pickett of Wyoming, I suggest you head southwest to New Mexico and make Bill Gastner's acquaintance. He'll make sure you feel welcome!