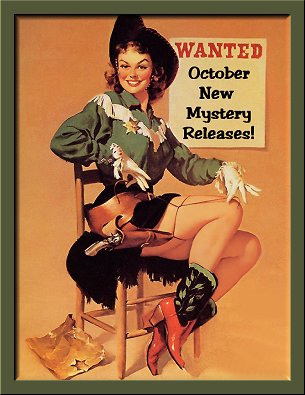 How did it get to be October already??? It won't be long before I'll be getting all my Christmas decorations out and turning our home into a holiday wonderland!

The pool water has already cooled off enough that I can't sit in there for extended periods of time to read, so I've migrated to a comfy chair in the shade close to the pool. My new reading spot is also closer to hummingbird feeders and birdbaths, so I often have my hair ruffled by various-sized wings.

And of course, I'm always on the look-out for new mysteries to read. This post contains my latest round-up of titles that will be released during the month of October. The titles are grouped by release dates, and I've included the information you'll need to find them at all your favorite book spots. Happy reading! 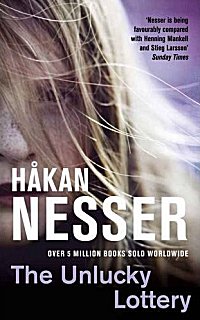 
"Four friends celebrate winning the lottery. Just hours later, one of them – Waldemar Leverkuhn – is found in his home, stabbed to death.

With Chief Inspector Van Veeteren on sabbatical, working in a second hand bookshop, the case is assigned to Inspector Münster. But when another member of the lottery group disappears, as well as Leverkuhn’s neighbour, Münster appeals to Van Veeteren for assistance.

Soon Münster will find himself interviewing the Leverkuhn family, including the eldest – Irene – a resident of a psychiatric clinic. And as he delves deeper into the family’s history, he will discover dark secrets and startling twists, which not only threaten the clarity of the case – but also his life...." 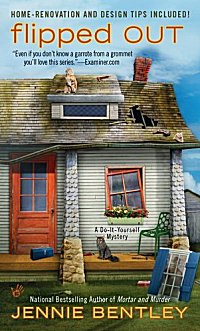 "Avery and her hunky handyman boyfriend are renovating a house belonging to a local news anchor who's thrilled to be filmed as part of a home renovation show. But cable television fame proves fleeting when the man is murdered and Avery faces the task of nailing the killer. Fast." 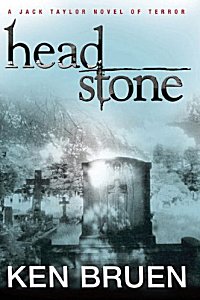 "Acclaimed Irish crime writer Ken Bruen has won numerous awards for his hard-charging, dark thrillers, which have been translated into ten languages. In Headstone, an elderly priest is nearly beaten to death and a special-needs boy is brutally attacked. Evil has many guises and Jack Taylor has encountered most of them. But nothing before has ever truly terrified him until he confronts an evil coterie named Headstone, who have committed a series of random, insane, violent crimes in Galway, Ireland.

Most would see a headstone as a marker of the dead, but this organization seems like it will act as a death knell to every aspect of Jack’s life. Jack’s usual allies, Ridge and Stewart, are also in the line of terror. An act of appalling violence alerts them to the sleeping horror, but this realization may be too late, as Headstone barrels along its deadly path right to the center of Jack’s life and the heart of Galway." 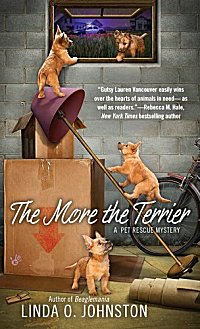 "When shelter manager Lauren Vancouver finds out that her old mentor, Mamie Spelling, is an animal hoarder, no one is more shocked, and she jumps in to help re-home the cramped critters. But Mamie's troubles don't end there. She's accused of murder when the CEO of a pet shelter network is found dead. And Lauren's dogged determination to clear her former friend of murder may put a killer on her tail." 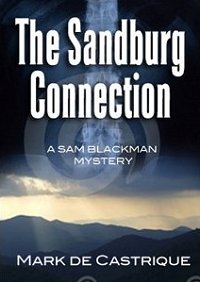 
"A simple assignment for private investigator Sam Blackman and his partner Nakayla Robertson: follow Professor Janice Wainwright, who’s suing a surgeon for malpractice, and catch her in activities that undercut her claim.
When Wainwright visits Connemara, Carl Sandburg’s home in Flat Rock, N.C., and climbs the arduous trail to the top of Glassy Mountain, Sam believes he has the evidence needed to expose her—until he finds the woman semi-conscious and bleeding. Her final words: 'It’s the Sandburg verses. The Sandburg verses.'
As the first person to discover the dying woman, Sam becomes the prime suspect. When an autopsy reveals painkillers in her blood and solid proof of the surgeon’s errors, Sam is left with the haunting questions: why did this suffering woman attempt to climb the mountain? Did someone cause her death?
A break-in at the Wainwright farmhouse and the theft of Sandburg volumes convince Sam someone is seeking information worth killing for. But what did Pulitzer-Prize-winner Sandburg have in his literary collection that has inspired multiple murders? And who will be targeted next?" 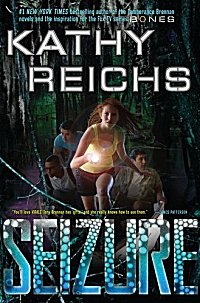 "Ever since Tory Brennan and her friends rescued Cooper, a kidnapped wolf pup with a rare strain of canine parvovirus, they've turned from regular kids into a crime-solving pack! But now the very place that brought them together - the Loggerhead Island Research Institute - is out of funding and will have to shut down. That is, unless the Virals can figure out a way to save it!

So when Tory learns of an old Charleston legend about a famous she-pirate, Anne Bonney, whose fortune was never found, she can't believe her luck - buried treasure is exactly what she needs to save the Institute on Loggerhead! Trouble is, she and her friends aren't the only ones looking for it. And this time, the Virals' special powers may not be enough to dig them out of trouble...." 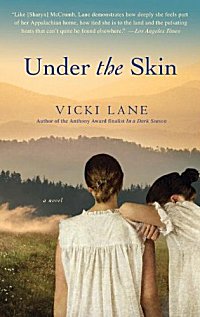 "Elizabeth Goodweather and her city-girl sister, Gloria, couldn’t be more different. Elizabeth lives on a farm inthe Great Smoky Mountains. Gloria lives in Florida off an ex-husband’s fortune. Gloria is a beauty; Elizabeth isn’t. Now, to Elizabeth’s intense displeasure, Gloria parks herself at Full Circle Farm, on the run from her latest man, who, she insists, is trying to kill her. Elizabeth thinks this is just another of her sister’s fantasies. Besides, Elizabeth has her wedding to plan—if only she can overcome her fear that the man who already shares her life may not be what he appears to be. At this precarious crossroads, the sisters must turn to each other—or face a lifetime of consequences." 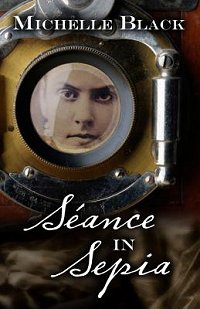 "When the price of an unusual picture called a spirit photograph, which some Victorian spiritualists claimed was a photograph of the departed taken during a seance, sells at auction for over a thousand dollars, Flynn Keirnan is determined to discover the story behind it. She soon learns the ghostly images of the woman and two men in the picture were the subjects of a sensational murder trial in 1875 Chicago. A young architect was accused of killing his wife and best friend in what the local press dubbed The Free Love Murders. Flynn tracks the story through many sources, including the trial transcript, a journal kept by one of the victims, and notes from a jailhouse interview with the husband conducted by feminist firebrand Victoria Woodhull for her radical newspaper. Woodhull, also known as a spiritualist, was asked by the accused to contact the spirits of his wife and friend to obtain details about the deaths. Was it a double homicide, a double suicide, or a murder-suicide and, if so, who killed whom? Flynn Keirnan discovers the key to solving the Free Love murders lies in learning the provenance of the photograph itself. When she does she finds that, like Victoria, her own outlook on love has changed." 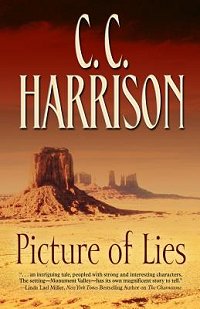 "Investigative journalist Keegan Thomas has been living a nightmare of guilt and grief since her little girl, Daisy, was kidnapped practically in front of her eyes. When the police investigation stalled, she turned her grief to anger and buried herself in her work searching for missing children, her own included. The result was an award-winning series of articles on unsolved child abductions. Then came the inevitable burnout.

On what is supposed to be a working vacation, Keegan travels to Monument Valley on the Navajo Indian Reservation seeking the whereabouts of people in an old photograph found in her grandfather s belongings after his death.

But the Indians do not welcome this nosy stranger carrying a picture of their old people, some of them dead. While navigating the mysterious ways of the Navajo, Keegan is told one of the children in the photograph was kidnapped by missionaries and taken to a boarding school.

Keegan s search for the child leads to a web of deception that stretches back two generations, and the truth Keegan learns about her own family is the most shocking betrayal of all." 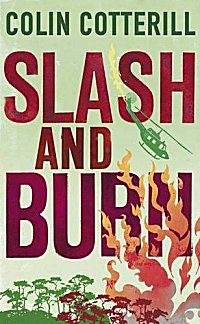 "Things have been pretty hectic for Dr Siri. Now he's off on what he calls a 'therapeutic holiday' in the mountains with his wife and friends. But sadly there's no rest for the wicked - with the help of a little blackmail they are accompanying an American MIA team. Their mission is to discover what happened to a stoned airman downed ten years earlier. Could he have survived? Who is eliminating the last people to have seen him alive? And who, we ask, is lighting the fires that are shrouding the Friendship Hotel in smog? In the remote Plain of Jars, surrounded by a thousand tons of unexploded bombs, Siri and the morgue team have to discover who is the killer in their midst before they too become victims."

What a great month for crime fiction! It's a perfect blend of old favorites like Ken Bruen, Mark de Castrique and Colin Cotterill-- and a new-to-me local author, C.C. Harrison.

Are you adding any of these books to your own wishlist? Which ones?