The Dinosaur Hunter by Homer Hickam 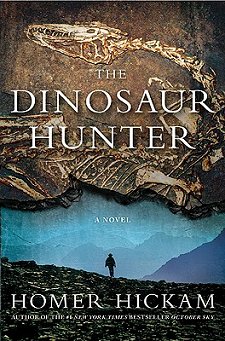 First Line: Old Bill Coulter used to say a quiet day in Fillmore County is a temptation to God and sure enough, come sundown after a day of blue skies and fair winds, distant pulses of lightning began to play along the horizon, heralding a big storm on its way.

Life on a Montana ranch is not for the faint-hearted, but some people seem to enjoy it. One of them happens to be retired homicide detective Mike Wire who left Hollywood to spend his days helping run the Square C and secretly love its owner, Jeanette Coulter.

Montana isn't just about ranching; however, the Square C lies in the midst of some of the richest areas of dinosaur fossils in the world. When a paleontologist and his assistants show their permits allowing them to search for fossils on BLM (Bureau of Land Management) land, Mike has a feeling that they're bringing trouble with them-- and he's right. Dinosaur bones can mean a fortune to whomever finds them first, and it's not long before the buzzards start circling.

I originally chose this book to read because it was supposedly a mystery, but the further I read, the less like a mystery it became. When the mystery arrived with the first murder about two-thirds of the way through the book, the Russian mob angle was a bit too far-fetched for me. Although the solution entailed a humorous section with a group of local survivalists that made me laugh, that, too, was a bit too much for me to swallow.

Mike Wire, the main character, also has his share of problems. (Must be that Hollywood influence still clogging a few of his brain cells....) His reasons for being a cowboy-- and a vegetarian one at that-- are good ones, but he has two annoying characteristics. One, he certainly does fall in love with a new woman quickly for a man who's been pining away for his boss lo, these many years. Two, this book is written from his point of view, his voice-- and Mike Wire is constantly telling us that he's done one thing when he's really told us that he wanted to do. He then has to backtrack and tell us what actually happened. The first couple of times he does this, it's a bit confusing. The next couple of times, it's amusing. From then on it's just plain annoying.

If I forget all about expecting this book to be a mystery and concentrate on its true strengths, I am left with a book that I still enjoyed quite a bit. Like the books of Peter Bowen, The Dinosaur Hunter is a paen to the wild and rugged landscape of Montana and the fiercely independent souls who live there. It also takes the reader on several digs for dinosaur bones. These are the truly fascinating passages in the book and will have anyone who's interested in the subject glued to the page.

If you're willing to ignore the main character's bad habits and forget about the mystery and concentrate on the dinosaurs, you're in for an enjoyable read.


Learn More from Amazon.
Learn More from The Book Depository.
Learn More from Your Indie Bookseller.
[A note about reading this book that has everything to do with its previous owner and nothing to do with the story. I received this book through Paperback Swap. One afternoon I realized that, as I was reading, I was scratching my itchy, runny nose. I happened to look down and see that the top of my navy blue swimsuit was literally covered with white cat hair. From the amount of cat hair that came out from between this book's pages, I'd swear there was a bald Persian winding around someone's ankles out there.
People complain about receiving books that smell of cigarette smoke and contain food stains, but for some reason, my receipt of a book filled with cat hair bothers me more than the previous two offenses!]
by Cathy at Wednesday, September 21, 2011