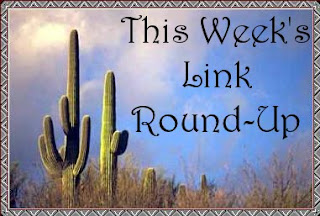 Another quiet week here at Casa Kittling. For one thing, it was a bit too warm to be getting into any shenanigans. (116°F/47°C) Throw in a couple of doctor's appointments, a run to the grocery store for needed ingredients, and all I wanted to do was spend the afternoon in the shady end of the pool with a succession of good books and cold drinks.

In the evenings while Denis is at work, I've been watching DVDs and Netflix instant streaming while I needlepoint. The first two weeks, I conducted my own Richard Chamberlain Film Festival ( "The Thornbirds" and "Shogun"), and now I'm watching the original "Star Trek" television series. I've also started making Christmas stocking shelf sitters while watching television, hence the "ho, ho, ho." Something tells me that a few of the gaps (yes, I have those) on my bookshelves will have Christmas stockings on them.

Enough about my yawn of a week, and let's get on to the links!

There you have it-- this week's links. Don't forget to stop by next weekend when I'll share a freshly selected batch of links for your surfing pleasure!