Enter to Win in My Very First Giveaway!! 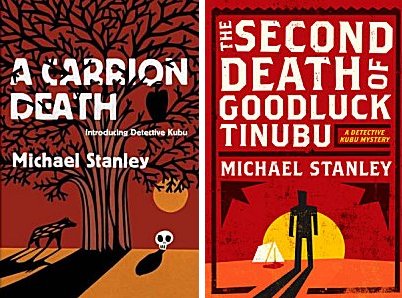 I've been considering giveaways here on Kittling: Books for quite some time. I don't want to have them all the time, but a special one now and then could be a very good thing.

A special giveaway landed right in my lap when Stanley Trollip of the writing team Michael Stanley asked me if I wanted the first two Detective Kubu mysteries as prizes on my blog. In the emails that zipped back and forth, a giveaway was born.

TWO lucky readers will win the first two Detective Kubu mysteries written by Michael Stanley-- A Carrion Death and The Second Death of Goodluck Tinubu. This is a worldwide giveaway, and before the books are mailed to the winners, they will be inscribed to them by the authors. Isn't that great?

Not only that, but there are no rules to remember, no hoops to jump through. Open worldwide. One entry per person. The winners will be announced on Tuesday, September 6... which just happens to be the release date of the third Detective Kubu mystery, Death of the Mantis.

This is a wonderful opportunity to have your very own copies of two mysteries with a very strong sense of place, involving plots, and an engaging main character. Fill out the entry form below!