A Touch of Gold by Joyce and Jim Lavene 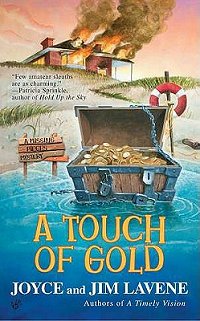 First Line: "On a dark night in 1812, the schooner Patriot vanished with all hands onboard, never to be seen again."

Before he ever became the curator of the Duck Historical Museum, Max Caudle had discovered the museum's greatest treasure-- a wooden chest filled with gold coins. But it seems that someone wants that gold, and when a cannonball is fired into the building, Max is killed, Mayor Dae O'Donnell is injured-- and the gold disappears.

Before her ears have a chance to stop ringing, Dae finds out that her ability to touch an object and learn its history has been greatly amplified. Excruciatingly amplified: Dae starts wearing gloves and avoids touching anything. Fortunately she can blame the gloves on her injuries so people don't ask too many questions. But she has questions of her own, and with the help of ex-FBI agent Kevin Brickman, she hopes to learn how to use and decipher her visions in order to catch a killer before someone else dies.

As in the first book in the series, A Timely Vision, two of the characters annoyed me-- Dae's half-baked medium friend, Shayla, and Tim, the man who refuses to believe that he and Dae won't be getting married in the near future. Fortunately they didn't make many appearances in this book.

I did enjoy the twists and turns of the plot and getting to know the people of small town Duck, North Carolina better. A very interesting subplot involved an historical figure, Theodosia Burr (daughter of Aaron Burr), whom I'd read about in the past. Bringing in bits of local history like this adds a great deal of depth to the setting and the characters.

Dae has survived trial by cannonball. I'm eagerly awaiting what's in store for her next.