Thursday Next, First Among Sequels by Jasper Fforde 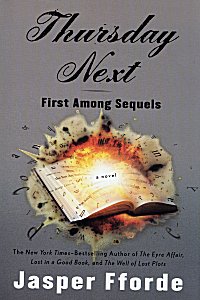 First Line: The dangerously high level of the stupidity surplus was once again the lead story in The Owl that morning.

I stumbled across the first book in this series on a table at a local Barnes & Noble. The only reason why I bought The Eyre Affair was that I am a Jane Eyre fan-- and the plot sounded like fun. Little did I know what I was getting myself into! There is a reason why the books in this series are consistently nominated for (or winners of) the Dilys Award-- they are so filled with word play, social commentary, satire, and literary allusions that they are just plain fun to sell. I know that I've waved more than my fair share of copies of The Eyre Affair in the faces of people who asked me what I thought they should read.

In Thursday Next, First Among Sequels, it's been fourteen years since the action in Something Rotten. Thursday and her husband have several children, including a very cranky sixteen-year-old named Friday. Thursday puts on her uniform and shows up for work at Carpet World in Swindon every day. But things are not quite as they seem. (If you've read Fforde, you know that last sentence is a given.)

Sherlock Holmes dies at Rheinback Falls, and the series comes to a screeching halt. Miss Marple dies in a car accident, and she's stuck her nose into her last investigation. When strange things begin to happen to Thursday's fictional self, she knows what's going on: there's a serial killer loose in the Bookworld. To top it all off, Goliath Corporation -- which has been strangely silent the past few years-- wants to deregulate book travel. It's time for the real Thursday to stand up, to stop making illegal cheese buys, and to save the Bookworld once again!

When I began reading these books, I was afraid that half the puns, other word play, and references to things British were zooming over my head at the speed of light. Now that I'm a bit older, I've mellowed. Yes, I may very well be missing some bits, but I don't care-- I love all the bits that I do understand.

These books always have an interesting storyline-- like the one in which the serial killer resides-- but there is so much more going on. Reading Fforde's take on modern society (such as the stupidity surplus) is so true that it's funny, and I laugh even though I have a good idea that I shouldn't. If you tire of social commentary, puns, satire, the twists and turns of the plot... and you just want a good laugh, reading the scene of Thursday's illegal cheese buy is out-and-out hilarious. Fforde's world is even facing declining book sales just like our world.

For those of you who have hesitated to read these books because you believe you're just not well-informed about classics like Jane Eyre or Pride and Prejudice, I urge you to reconsider. There's been a book or two that's been included in the series that I'm not well-acquainted with, but it really didn't make a difference. More than anything else, reading these books is all about FUN. That's "fun" in capitals-- something that we all could use a good strong dose of.