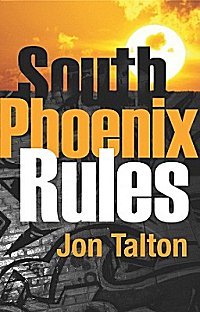 First Line: The August heat in Phoenix has a color.

Changes are staring David Mapstone in the face. His boss was defeated in the recent election, and Mapstone knows he's on the way out, too. He has no clear idea of what he's going to do next. All he does know is that his wife is still on assignment in Washington, DC, and he's not exactly happy that her sister, Robin, is living in the apartment above his garage.

When the history professor Robin is dating is killed and connected to a deadly drug cartel, Mapstone knows that Robin's life is in danger. In order to protect his sister-in-law, he has to turn from history and cold cases to the very real and very current world of smuggling (people, drugs, guns) in Phoenix.

Once again Talton has crafted a gripping mystery with a main character I've grown to care about-- and taught me more Phoenix history along the way. Mapstone is a Phoenix native, raised by his grandparents in an older home in an older neighborhood. He's seen the way Phoenix has changed, and he doesn't like it. (When I think of the changes this city has undergone since I moved here in 1976, I understand at least part of Mapstone's pain.) Talton uses this knowledge of the past as well as the here-and-now to excellent effect-- even down to the new sheriff of Maricopa County having won the election with a STOP ILLEGAL IMMIGRANTS! campaign.

The tension keeps simmering with gang members watching the house, shootouts in parking lots, illegal gun sales, and Mapstone's very uneasy relationship with his wife. Perhaps it was because I knew which Pete's Fish and Chips Mapstone was meeting a bad guy at, or because a suspect lived a few blocks from me, but I almost felt as though I needed eyes in the back of my head as I read this book. I love reading a book that keeps me that involved in the action.

If you live in Phoenix and love crime fiction, you should definitely read this series. Even if you live elsewhere, you should enjoy these well-written books featuring the "History Shamus". How well does this book stand on its own? It stands on its own rather well. There are comments made about events in previous books, but they shouldn't be confusing.... Hopefully they'll make you want to read the rest. The characters in this series grow and change, and I've enjoyed experiencing the changes along with them. Perhaps you will, too.