The Poisoner's Handbook by Deborah Blum 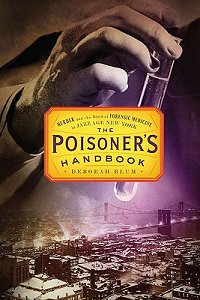 First Line: It would, of course, be in the cursed winter of 1915-- when ice storms had glassed over the city, when Typhoid Mary had come sneaking back, when the Manhattan coroner was discovered to be skunk-drunk at crime scenes-- that the loony little porter would confess to eight poison murders.

For centuries, poisoners knew that they could commit murder and walk away scot-free because no one knew anything about how the evidence of poison could be proved without doubt in a body, or even exactly what the poisons did. Combine this knowledge with the fact that coroners in the United States had no real training and often got their jobs because they "knew the right people", and it was easy to see that things were rapidly getting out of hand.

To the rescue came two men: chief medical examiner Charles Norris (who loved to get in the faces of his superiors and demand that things be done right) and toxicologist Alexander Gettler, who demanded perfection from himself and his staff, no matter how many times (or how many years) the research and experiments took. Both men had seen poisoners commit murder and get away with it because of shoddy investigative work. Both were committed to seeing an end put to it. No matter what it took.

I am no expert in chemistry, so I can't attest to how accurate Blum's descriptions and facts are. (There are extensive notes and an index at the end of the book.) What I do know is that this book is fascinating. Ignoring poisoners who got away with murder, when you take into account that hydrogen cyanide gas was regularly used to fumigate buildings, that arsenic was commonly found in such things as cosmetics and wallpaper, and that workers were routinely expected to handle lethal poisons-- it's easy to wonder how on earth anyone survived the time period.

Then along came Prohibition, and drinking and arrests for public drunkenness went through the roof. Evidently no one liked being told they couldn't have a beer now and then. As the "good stuff" came to be in very short supply, unscrupulous people looking to make a quick buck started turning out all sorts of booze-- a lot of which contained lethal poisons. If the stuff didn't kill you outright, you could go blind or walk funny the rest of your life. Towards the end of Prohibition, the lethal booze was mostly ignored by the government. After all, these people were breaking the law, so they deserved whatever they got. Nice, huh? The fledgling Food and Drug Administration couldn't do a thing because no one knew anything about proving how these toxins worked in the human body. No one, until Norris and Gettler, that is.

This book fascinated me from beginning to end. Blum knows how to make facts and history come to life. If you like watching "CSI"-type programs, you should think about reading The Poisoner's Handbook. It's an eye-opening, and entertaining, experience.