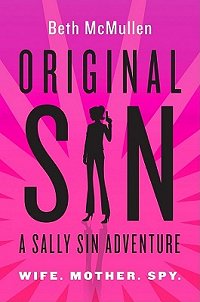 Lucy Parks Hamilton is a stay-at-home mom to a toddler-- but is that all she is? She's chosen Theo's daycare more for its entrances and exits than anything else, and while the toddler is there, she's staked out at a near-by coffee shop, watching the building. It might be a case of Paranoid Mom, but it is more than that.

For several years, Lucy Parks Hamilton was known as Sally Sin, a spy traveling around the world for her employer, the USAWMD (United States Agency for Weapons of Mass Destruction). Tiring of the life...or the lack of one... Sally retired, got married to a man who promotes green living, and is raising her son. Unfortunately, the USAWMD can't leave her alone. It desperately needs her expertise and calls her back into the field. How Sally's going to be a wife, mommy and spy all rolled into one remains to be seen.

The strength of this book lies in its humor and in the characters of Sally and her husband. The humor does tend to be of the slapstick variety, and several scenes made me chuckle aloud as I read. However, I did find Original Sin to be confusing. Was the author trying to appeal to as many readers as possible? Is this book supposed to be a sassy, humorous mystery? A spy thriller? MommyLit? I have no idea.

Although I liked the character of Sally and her irreverent voice, she was confusing as well. If you listened to her, you'd swear she was a total klutz, but then she'd suddenly whip out some fantasmagorical martial arts move and save her bacon for the next scene.

There are several references to her parents that give the impression that there's more going on than meets the eye, and these undoubtedly are the foundation for future books in the series. However, between Sally switching from klutz to better-than-James-Bond between bats of her eyelashes, and the unsettling switches back and forth between genre types, I feel as though I just staggered off a roller coaster.

For the humor and the character of Sally, it's worth the read-- and since your mileage will certainly vary, you may very well enjoy the ride much more than I did.