In Search of the Rose Notes by Emily Arsenault 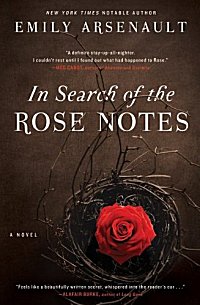 First Line: When I was a kid, I used to stop cold whenever one of those commercials came on.

Eleven-year-old best friends Nora and Charlotte used to go to Charlotte's house after school and spend the afternoon with their babysitter, teenager Rose Banks. When Rose disappeared without a trace, the girls knew they had to do something, so using old Time-Life books as their guide, they conducted their own investigation-- which led nowhere.

Now Nora is in her late twenties, married and teaching in Virginia. When she gets a phone call from Charlotte telling her that Rose's remains have been found, Nora doesn't really want to return to Connecticut where she and Charlotte became estranged and her teenage years were so troubled. But Charlotte can be a force to be reckoned with when she wants to be. Charlotte wants to join forces once again to find out what happened to Rose, and Nora reluctantly agrees to return. Nora was the last known person to see Rose alive, and she just doesn't feel ready to revisit her adolescence or the events surrounding Rose's disappearance. She's not back very long before long-buried secrets begin to emerge.

Almost from the beginning, I began to identify with Nora. Nora is a quiet observer, and it was obvious to me that she had suffered from depression. Charlotte is more in-your-face-- with an innate desire to be the winner, to be special. Charlotte is always probing for the facts, even though she doesn't really want to know what they're telling her. She likes to put her own spin on things.

Being no stranger to Time-Life books myself, the two young girls using them as a basis to conduct their investigation was amusing. They did indeed pick up clues along the way, but they were too young to interpret them. (And even though Rose isn't a part of the action very long, she's so well-drawn that you want to know what happened to her.) As adults, Charlotte is still digging for facts, but it's the more intuitive, more emotional Nora who very slowly begins to put things together.

In Search of the Rose Notes builds tension and suspense gradually and held my interest throughout. Nora and Charlotte were fully fleshed characters that I strongly reacted to-- Charlotte irked me to no end most of the time, and quiet Nora was really the winner, the special one. She found out what really happened to Rose all those years ago, and she found the strength to kick the toxic bits of her life to the curb and find happiness. As a mystery and as a character study, this book is a winner.