Scene of the Crime With Author Jessica Speart

I was familiar with Jessica Speart's series featuring U.S. Fish and Wildlife agent Rachel Porter (which begins with Gator Aide), but it was her latest book, Winged Obsession, that held me down and wouldn't let me come up for air.

Jessica was born and raised a Jersey girl, and her passion for animals began during a trip to Africa. Her writing career began when she started writing articles about wildlife law enforcement, endangered species issues, and the environment and sold them to magazines. The books came when she realized the characters in her articles were stranger than fiction.

If you'd like to know more about this author, let's start with a list of her Rachel Porter mysteries and follow it with these other sites:

Now, let's get started with that interview!

I read so many good books while growing up.  However, one that made a memorable impression was Misty of Chincoteague by Marguerite Henry.  What’s not to love about ponies running around on “the isle of wild things?”  It was adventure and nature all rolled into a marvelous story.

Writing takes up most of my time, but spare moments are spent reading, traveling and seeing friends.  I also try to take advantage of living near NYC and all that it has to offer.

I’m afraid my hometown is a pretty quiet place with just a post office, general store and a small restaurant serving breakfast and lunch.  But it’s also a magical town with land preserves, streams and plenty of wildlife.  There’s even a secret spot where I can go and pick blueberries to my heart’s content. [Sounds like a wonderful place to me!]

You’ve stumped me on this one.  I hope to be pleasantly surprised one day.


You and I are both wildlife lovers. I grew up in farm country in central Illinois. I idolized my grandfather, and I'd always go out hunting with him and our dogs. I never liked it when he shot anything, and I wouldn't eat meals with my grandparents when they ate what he shot. One fall morning, I remember tromping through a spent cornfield, and as Grampa took a shot at a quail, I thought, Grampa's not the only person around here who goes hunting. Are there enough quail or pheasants or rabbits to go around? That's when I started reading about conservation and endangered species.  Was there any particular "A-ha Moment" for you?

My "A-ha Moment?"  It was when my mother became furious with a cat for killing a bird.  Then she realized we basically do the same thing by eating meat.  We both became vegetarian as a result.  At least for many years.  I still rarely eat red meat.

Okay, I admit to having a soft spot for Jack Reacher in the Lee Child series.  But then, don’t most women who read one of his books?

I worked as a freelance writer for magazines before my Rachel Porter mystery series was published.  I specialized in wildlife law enforcement and endangered species issues.  That continues to be the focus of my books.

What did I do the first time I saw one of my books on a bookstore shelf?  That’s easy.  I turned it face out.  My celebration was to buy a nice bottle of wine.

Everyone has horror stories about bookstores signings.  Parnell Hall was clever enough to sum it up in a song.  I think the worst signing I ever had was in Michigan where my audience consisted of just two senior citizens.  Both were hard of hearing.  I not only had to shout the entire time, but they didn’t even buy a book.

I don’t see eBooks as a ghastly threat to the future of print books.  They’re here and are not going away.  I like to think of it as an alternative.  I just hope people continue to read. [That is the important thing!]


Thank you so much for spending this time with us, Jessica, and for giving us such a wonderful book as Winged Obsession! 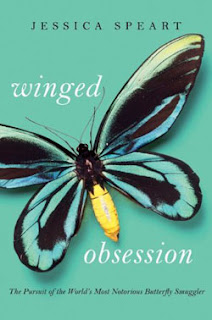