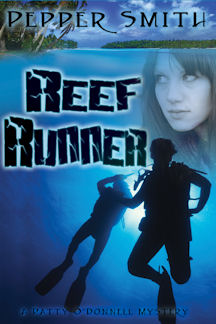 First Line: It wasn't my cousin Collin's face that caught my attention first.

Patty O'Donnell has the life that most people dream of. She's married to a man whom she loves deeply, she has work that fulfills her, and she has an infant daughter whom she adores. Unfortunately, some people in a person's past refuse to stay gone, and while Patty is visiting her family in Arizona, she is kidnapped and taken to Australia where she's told in no uncertain terms that she will do as she's told, or her daughter and husband will be killed. Patty has no alternative but to obey and either hope that the years pass quickly, or -- somehow, some way-- she'll be rescued.

One of the main reasons why I enjoy this series so much is because Patty is such a strong, resourceful character. She refuses to be defeated. Although this book is an interesting study showing what happens to such a strong-willed person when all the options are removed, tying Patty's hands also hogtied the story. The one thing that could've really rescued it was a lengthier description of the scam in which Patty was being forced to participate, but although that storyline had great possibilities, it was dealt with very quickly.

When the villain got away clean in Rio Star, I hoped that he would stay gone. I actively didn't like the guy and, if faced with him myself, would have been tempted to do an Indiana Jones versus the sword fighter in Raiders of the Lost Ark. Yes, I had a strong reaction to the character, which is an indication of how good Smith's writing is. In fact, I disliked the bad guy so much that, during the section in which his background and motivations are brought to light, I couldn't work up much sympathy for him.

The brightest part of Reef Runner for me is that this particular bad guy has been taken care of, and I look forward to a new book in which Patty is back to her feisty, resourceful self.