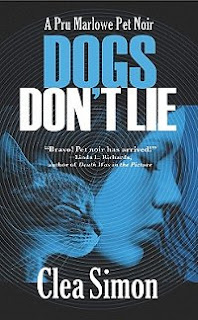 First Line: The problem with murder is that it's messy.

Pru Marlowe is an animal psychic. To escape the cacophony of furry voices in her head, she ran from the big city back to her small town home in the Berkshires hoping for a little peace. Unfortunately her training as an animal behaviourist and her need for money to pay the bills put her right in the path of Lily, a rescue dog, and Charles, her person. Now Charles is dead, and the distraught Lily looks like the killer. After all, she's a pit bull-- a drop-out from the fighting ring. The dog is so traumatized, however, that she can't give Pru a clear picture of what happened.

Even though Pru can't tell anyone about her gift, she feels that Lily deserves justice, and she begins gathering clues and discovering what sort of secrets a small town can hide. Relying on her grumpy cat, Wallis, Pru comes to realize that, if she does clear Lily, Pru herself is going to become either the new prime suspect... or next on the killer's list.

My rating of this book has little to do with how well written it is-- and it is-- and more to do with my expectations. I was well aware that Simon is the author of two mystery series featuring cats, and I've avoided them because I do not like cats. Once I stop sneezing and itching, I might tell you the other reasons why I do not care for our feline friends. When I saw the title of the book, saw "Pet Noir" and "animal psychic", I thought that I was going to be reading a book that focused primarily on dogs. I was wrong.

The book is centered on Pru-- a character I really liked-- and her tabby cat, Wallis-- a smug, superior piece of fur that I didn't like at all. Dogs featured very little in the action, and many times canine intellect was brought into question, which really rubbed my fur the wrong way.

The book is well-written and well-paced, and I didn't identify the killer until shortly before the reveal. Simon also has a lot of interesting, common sense things to say about animals and their owners. I like the whole concept of an animal psychic as lead in a mystery series. I would just prefer the psychic didn't team up  with a cat.

If you like cats, or if you come to this book without the expectations that I did, you should be in for an enjoyable read.