Sworn to Silence by Linda Castillo 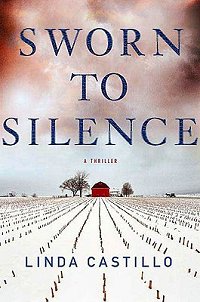 First Line: She hadn't believed in monsters since she was six years old, back when her mom would check the closet and look beneath her bed at night.

Kate Burkholder was born and raised Amish in small Painters Mill, Ohio, but a traumatic event when she was fifteen made her turn her back on her upbringing and leave her home. Now she's back in Painters Mill as police chief, and although her people tend to pretend she isn't there, she's well thought of in the community, and she's hired good people to work with her. Her job is everything to her.

But the nude, tortured body of a young woman throws Kate's life right back into the nightmare that occurred when she was fifteen. The murder has all the earmarks of the Slaughterhouse Killer who plied his horrible trade in the area sixteen years ago. Whispers begin to circulate, but Kate knows it has to be the work of a copycat. Why? She knows why the murderer stopped killing all those years ago. It's a secret that she has to try to keep while she's working this current case.

Convinced that she alone has the solution to the investigation, Kate is slow to ask for help from other law enforcement agencies, so the town politicians take matters into their own hands and set up a multi-jurisdictional task force with the county sheriff and Ohio Bureau of Criminal Investigation agent, John Tomasetti, lending a hand. The sheriff is all sweetness and light around anyone in a position of greater authority, but his real agenda is to undermine Kate's credibility. Tomasetti, on the other hand, is an entirely different piece of work, called "dead weight" and a "train wreck" by his superiors. Tomasetti has been sent in hopes that he will fail brilliantly and allow the BCI to get rid of him.

So there are all sorts of things swirling around in Sworn to Silence. The two main characters, Burkholder and Tomasetti, are the type of character that I enjoy reading about: strong, intelligent and flawed. It's how they work past their flaws that makes this book so strong.

The plot is well-paced, and I only had the vaguest inklings of the identity of the Slaughterhouse Killer. Castillo does reveal the killer's identity toward the end, which left me to wonder how long it would be before Burkholder figured it out. This device certainly ratcheted up the suspense.

The depiction of a small town in Amish country was well done, especially in the way that the Amish tried to keep themselves separate from the rest of the community in an attempt to handle situations according to their own beliefs.

The characters were vivid in my mind, especially the graveyard dispatcher, whose role models are Kate and Stephanie Plum. Since the book tends to be grim, humorous tidbits like this added a welcome touch of lightness.

Even the landscape played a part in the book. There can be something more than a little spooky about farm country in the winter:

My speedometer hits eighty miles per hour on the highway, but I slow to a reasonable speed once I reach Thigpen Road because it's slick with snow. The Huffman place is down a short lane and surrounded by skeletal trees, like bony fingers holding the place together.

Strong story and strong characters mean that this is a series I will be visiting again and again.