Scene of the Crime with Author Pepper Smith

My regular readers will know that I've recently discovered the Patty O'Donnell series written by Pepper Smith, and I've really been enjoying them. In fact, I'm going to go through withdrawal after I've read the third, Reef Runner.

Instead of making a pest out of myself by begging for new books, I thought I'd ask Pepper if she'd be willing to be interviewed here on Scene of the Crime, and I was thrilled when she accepted.

Pepper lives in Arkansas with her husband, son, and two cats. When she's not writing books, she volunteers as a suspense instructor at the Muse Online Writers Conference, which is held in October. She's also a singer, musician, artist, and photographer.

I couldn't find any links to Facebook or Twitter for her, but she does have a website and a blog. (Where would we be without blogs?) I enjoyed her most recent blog post because she talks about the books she's read recently. Being a total bibliophile, I not only like to read what authors write, I also like to find out what they've been reading.

Pepper's Patty O'Donnell series currently numbers three books: Blood Money (2010), Rio Star (2010), and Reef Runner (2011). Patty is a young woman from Arizona who goes to Ireland, and meets and marries an Irishman in the horse racing business. The books take place in Ireland, Italy, Argentina and Australia. If you like a strong, intelligent female lead who doesn't panic under the most stressful of circumstances, you're going to love these books that have a bit of horse racing, a bit of sunken treasure, a touch of larceny, and lots of danger.

Let's get to the interview!

I have to admit that I’m not sure how to answer this question.  My mother began teaching me to read when I was a year old, out of self-defense, because I’d given up taking naps and she wasn’t getting any time for quiet and rest.  I grew up a voracious reader, but I don’t remember details of a lot of them.

My love of horses came from a teacher reading Misty of Chincoteague to us in the 4th grade.  The Black Stallion series was responsible for my early interest in horse racing.  Nancy Drew and The Hardy Boys fed an interest in mysteries.  I remember being fond of Robert Heinlein’s books, especially Podcayne of Mars and The Puppet Masters, and Slan, by A. E. Van Vogt.  At this point, I can’t tell you why those last stories appealed to me in particular.

I like to read, which after question 1 probably goes without saying.  If I don’t have a book waiting to be read, or am between books and want a break, I like to make jewelry.  I also enjoy singing.

I live in a small bedroom community on the outskirts of a college town, and there isn’t anything in my town that I would direct you to that would be worth your time.  In fact, I think most anything worth seeing in the area is already in the guide books.

In the college town, Nightbird Books would be a definite place to go, especially for a book lover.  For mystery lovers, a drive past the old train depot on Dickson Street might be worth it, especially if you’re a fan of Joan Hess, who based her college town of Farberville and Claire Malloy’s The Book Depot on Fayetteville and the old train depot.  There’s Bikes, Blues and Barbecue in October, which is a big biker rally with concerts and street vendors selling food, also on Dickson.  If you’re there in the spring, the flowering trees are beautiful, and depending on the weather, the leaves in the fall can be spectacular.

I cringe at the thought of someone making a movie based on my life.  I think I’d procrastinate in choosing for so long that they’d abandon the idea of making it.

I think it would be a tie between Amelia Peabody Emerson and Vicky Bliss, both of whom are characters written by Elizabeth Peters.  There’s something about both characters that appeals to me greatly.

There were a long string of stories I wrote with a school friend about my series character, her twin sister, and her brother and cousins on their ranch in Arizona, beginning in her childhood.  I also wrote numerous science fiction stories, including a piece that was published in a college sci-fi zine, and a couple of Doctor Who fanfics published in a zine called Time Winds.  There are four stories previous to my novel Blood Money, which publishing houses wisely turned down, that chronicle Patty’s adult adventures from the trip to Ireland where she met her future husband, though their third year of marriage.

Like most of us, I think I wanted to run up and point at it on the shelf, so everyone in the area would come see what was going on.

I’m pretty certain that when I found out I was going to be published, I let out a yell that had my son running into the room to see what was wrong.  I don’t remember doing anything special to celebrate it, though.  That was one of our moneyless periods.

I love that video.  Having seen accounts by other authors about book signings, that’s probably pretty close to what they’re like for a lot of authors.

I’ve only done one book signing.  Our local indie bookstore, Nightbird Books, has a wonderful policy of featuring local authors, and had me scheduled with another author for a Saturday evening.  The other author cancelled, and only two people showed up for the signing, although a third arrived late, after I’d already read excerpts and answered questions for a bit.  Nightbird were wonderful hosts, and it was only later that we realized there was a big off-Broadway show just down the street at the Walton Arts Center, which may have had an impact on how many people showed up for the signing.

I think that when something new comes out, some people have a tendency to jump on the new and turn on the old with a ferocity that’s undeserved.  There have been a lot of overreactions on both sides, with some proclaiming the death of the print book, and others proclaiming as loudly that you can have their print books when you pry them from their cold, dead fingers.

Personally, I have both a large collection of print books, and a growing collection of ebooks, and add regularly to both.  There’s no way I would take my Nook to the Laundromat and risk having someone snatch it while I’m transferring clothes from the washers to the dryers, but I have little fear about leaving a paper copy sitting while I’m busy across the room with the clothes.  My Nook only has about six hours of battery life to it, so I’d probably take something print if I had to fly somewhere, and use the Nook where it could be plugged in and recharged.  The Nook has a backlit screen, so I can read in bed while my husband is sleeping and not worry that I’m disturbing him.

As an author, I’m not worried about the ebook revolution—in fact, my publisher was one of those far-sighted companies that was releasing books in both e- and print-format in the early part of the last decade, before the advent of the Kindle and the big publishing houses realizing that maybe there was something to this ebook thing after all.


Thank you so much for taking the time to talk with me, Pepper. It's been a pleasure!  I look forward to reading many more of your stories. 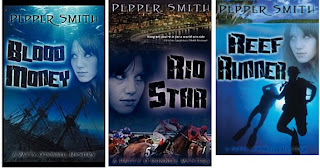