A Nail Through the Heart by Timothy Hallinan 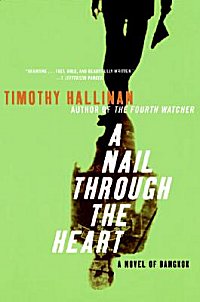 Unfortunately he was once very lucky in finding someone, and that luck has come to haunt him. Poke reluctantly agrees to try to locate an Australian woman's missing uncle, and even more reluctantly takes on the assignment of locating a blackmailer. He needs the money to speed the adoption of Miaow. To top it all off, that tiny urchin insists that he take another street child under his wing-- a very scary young boy known as Superman. Things are about to become very, very complicated. Not only is Poke not a real investigator, he really doesn't understand the country in which he's living, and that is a volatile and dangerous combination.

I could go on and on about characters that immediately latched on to my heart, a setting that I could taste and smell and feel, and a plot that flowed smoothly to its conclusion, but I won't.

What struck me most forcibly in reading A Nail Through the Heart was a true feeling for the culture of the people of Thailand. I have long been a fan of the novels of John Burdett which are also set in Bangkok. Featuring Royal Thai detective Sonchai Jitpleecheep, they also are fascinating portraits of the Thai culture. In them, however, I will never be anything other than a farang-- an outsider, a foreigner, a crass American who will never truly understand the Thai people. Although keeping me at that remove is a good thing for maintaining necessary humility, I found Poke's sometimes bumbling attempts to understand a very different culture made me an ally who was more willing to open her mind and her heart. As Poke learned, so did I.

Heart. Not only is heart in the title of this book, it is also on every page. As each chapter flowed into the next, I felt that Hallinan wrote this with a great deal of heart, of emotion... of love. As a result Thailand became alive to me in a way that it never had before.

Timothy Hallinan, you are jai dee.