In the Shadow of the Glacier by Vicki Delany 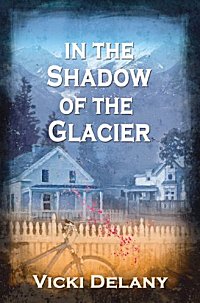 First Line: People were of two minds about Reginald ("Call me Reg") Montgomery.

It's not easy having a name like Moonlight Legolas Smith-- and having a brother named Samwise-- but that's what happens when you're born to two hippies who came to Canada to avoid the draft during the Vietnam War. Moonlight is used to it, and prefers being called Molly, thank you very much. She's a new beat cop in small town Trafalgar, British Columbia, and although her choice of occupation doesn't please her parents, it pleases her. She wants to do her best and work her way up the ladder.

It's not going to be easy, especially since one of the big names in town, Reginald Montgomery, has been found murdered. Reg was in Trafalgar to build a huge resort and take his chunk out of the area's tourism dollar. Half the town applauds the chance at added revenue, the other half hates the whole idea because of the probable impact on the environment.

The case is made more complicated by two things. One, due to a shortage of manpower, Molly is assigned to assist veteran Detective Sergeant John Winters in the investigation, and Winters makes no secret of the fact that he doesn't want her rookie help. Two, Reg's death has brought into the spotlight the fact that money and land have been left to the town to build a garden to honor draft dodgers-- and Molly's activist mother is at the forefront of those supporting the controversial memorial.

I dove into this book headfirst and almost didn't come up for air. Superficially, Molly doesn't seem to be likely law enforcement material. She's pretty, "too pretty to make an effective officer. Her voice was soft-- it would have a problem carrying authority--and had the unfortunate tendency to crack under stress." What she does have is intelligence and desire.

The teaming of Smith and Winters is perfect. Here we have a veteran cop from a big city who wants nothing to do with a young female rookie cop. It's all too easy for him to see all the negatives. But he just happens to be married to a former super model who's a canny businesswoman. Eliza Winters helps keep her husband from being permanently narrow-minded.

Although the murderer was rather transparent to me, the motivations weren't. Besides, there were so many well-drawn characters and such a well-paced plot that I didn't care. The media converging on the town whips the action into high gear, and the riot scene in particular held me in thrall. The book has so many interesting facets that I'm just scratching the surface in this review.

It's going to be very interesting to follow young Molly's path in the Trafalgar police force, and I'm really looking forward to reading the next book in this series.