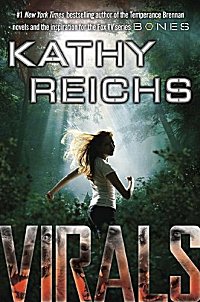 First Line: A gunshot is the loudest sound in the universe.

Tory Brennan is the niece of forensic anthropologist Temperance Brennan (of the Bones novels and hit television series). She's an admitted technology addict and "sci-phile" who loves the excavation tools and other technical gifts her aunt gives her. She and her friends live on a remote island off the coast of Charleston, South Carolina, and hang out in an old Civil War bunker.

Tory is fond of a small pack of wolf dogs who roam a nearby island, and when she discovers that one of the pups has been caught and is being used for medical testing, she and her friends rescue the canine, not knowing that it carries a contagious new strain of parvovirus. At roughly the same time on the same island, Tory finds a dog tag that sparks her curiosity. As she tries to find out more about the person who wore the tag, she and her friends unearth a skeleton. Things-- and their health-- begin to get seriously weird.

Reichs had me feeling as though I'd crash-landed in a bunch of teenagers that I'd have a blast with-- basically because I'm interested in the same things and had the same "fun" with the popular kids in my own high school. The chapters are short, move quickly, and pack a punch. Even though I'd deduced the identity of one of the villains, I didn't care, because the mystery involving the dog tag and skeleton held my interest so tightly. (The setting was superb as well.)

With Tory and her friends learning how to deal with the aftereffects of this strain of parvovirus, I'm really looking forward to the next book in this series.