Scene of the Crime with Author Jeffrey Siger

I have a reading challenge to thank for the discovery of this week's featured author on Scene of the Crime.

I've always enjoyed reading about other parts of the world, and when a fellow crime fiction fanatic began a Global Reading Challenge which prompted those who signed up to read books from each continent on the globe, I was in.

I already have maps on this blog that chart my reading country by country, and when I discovered that there was a mystery set in Greece, I was thrilled. I was even more thrilled when Murder in Mykonos became one of my favorite reads of 2010. When the author, Jeffrey Siger, agreed to an interview, I did a little happy dance here in the office!

The Greek Press called Jeffrey Siger's work “prophetic,” Eurocrime described him as a “very gifted American author...on a par with other American authors such as Joseph Wambaugh or Ed McBain,” and the City of San Francisco awarded him its Certificate of Honor citing that his “acclaimed books have not only explored modern Greek society and its ancient roots but have inspired political change in Greece.”

Jeffrey Siger was born and raised in Pittsburgh, Pennsylvania. He practiced law at a major Wall Street law firm and while there served as Special Counsel to the citizens group responsible for reporting on New York City's prison conditions. He left Wall Street to establish his own New York City law firm and continued as one of its name partners until giving it all up to write full-time among the people, life, and politics of his beloved Mykonos, his adopted home of more than twenty-five years.  When not in Greece, he enjoys his other home, a farm outside New York City.

If you'd like to know more about the author, here are some links you can check out:

Here are a few words from Jeff about his latest book: 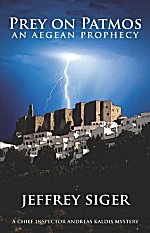 Thank you, Cathy, for the honor of being interviewed and the opportunity to discuss my work.  As you may know, I live on the Greek island of Mykonos where I write fast-paced mystery thrillers exploring issues confronting contemporary Greece in a way that touches upon its ancient roots.  My newest Chief Inspector Andreas Kaldis novel, Prey on Patmos, An Aegean Prophecy, has the Greek Church immersed in modern day intrigues amid a The Name of the Rose setting.  Here’s the story line to Prey on Patmos:

A revered monk is brutally murdered in the middle of the town square of Greece’s Holy Island of Patmos at the beginning of Easter Week, and it is up to Chief Inspector Andreas Kaldis to find the killer before all hell breaks loose—in a manner of speaking—for Patmos is where John wrote the apocalyptic Book of Revelation.

Andreas’ investigation takes him far away from Patmos to Greece’s isolated Aegean peninsula of Mount Athos, where twenty fairy tale-like castle monasteries sit protecting the secrets of Byzantium amid a way of life virtually unchanged for 1500 years in the world’s oldest surviving monastic community.  It is called “The Garden of the Mother God,” for when a ship carrying Mary was blown there off course, she fell in love with it and God declared that special place hers.  To this day no female is allowed to set foot on Mount Athos.

It is there, amid a real life A Name of the Rose setting, that the likes of Putin, George H. W. Bush, and Prince Charles come seeking seclusion, and where Andreas discovers modern international intrigues that threaten to destroy the very heart of the Church in a matter of days.

It's time for the interview, and as a treat at the end, there's a video of Mykonos which I know you'll enjoy. As for the photos, there are some gorgeous ones that Jeff very graciously sent, and you can view them in a larger size by clicking on them. On to the interview!

Hailing as I do from the point where the confluence of the Allegheny and Monongahela rivers forms the mighty Ohio I received dozens of copies of Huckleberry Finn as birthday and other special occasion gifts.  It was a local tradition.

And though memory fails me as to what made that book so special back then, as I’m finishing up a ten-week book tour for my latest novel, Prey on Patmos, a trek reminiscent of my grandfather’s horse and wagon huckstering days along those rivers, my mind runs to a passage where the Prince said to the Duke, “If that don’t fetch ‘em, I don’t know Arkansas.”

Let’s hope the comparison ends there, for as I recall the royals’ ended up tarred, feathered, and run out of town.

What free time?  Yes, I do have a farm in the U.S. that keeps me busy when I’m there, but on Mykonos my writing requires me to immerse myself in the island’s fabled 24/7 lifestyle, engaging persons possessing first-hand knowledge of the issues, experiences, and intrigues described in my books.  That sort of research requires me to free dive in Aegean waters and remain out and about well into the early morning hours diligently gathering all that comes my way.  I know, it’s a tough job, but someone has to do it.  [I wonder if he needs an assistant?]

If you mean Pittsburgh, it’s changed so much from when I lived there that the non-guide book things I used to do are long gone—like finding a place to sit at night and watch man-made hillsides fire up in color from molten slag hauled and dropped by rail cars from local mills.

Now big steel is gone (though the Steelers remain) and instead of that sort of fun Pittsburghers must now settle for life in a big medicine, high-tech driven economy, amid the reborn mill-side neighborhoods, restaurants, parks, shops, and world class museums (the Carnegie, Scaife, and Warhol collections to name a few) of what Forbes and other national publications describe as “The Most Livable City in America.”

As for my other hometown, Mykonos, it consistently ranks as Europe’s most desired island destination, ahead of such other magical locales as Capri, Ibiza, and St. Tropez (not an island, though it feels like one).  In Mykonos what I like doing most is strolling at sunset along a beach and looking across the sea toward the nearby Holy Island of Delos, the birthplace of Apollo, god of light, and his twin sister, Artemis, goddess of the hunt.  As I walk where the ancients had once walked, watching the sun set into the sea as they must have done, I wonder how akin their thoughts at such moments might have been to mine.

One who would win an Oscar.

My Murder is Everywhere blogmate Leighton Gage’s Chief Inspector Mario Silva, the separated at birth Brazilian brother of my very own Athenian born Chief Inspector Andreas Kaldis, a second-generation cop and politically incorrect, honest observer of his times who endures and grows despite all that life and the powerful throw at him and his beloved Greece.

I’ve always written creatively, though when I did so as a lawyer it was stylistically, not factually, so—at least that’s my story and I’m sticking to it.  When a dozen years or so ago I decided to take the leap and commit to serious writing efforts, I produced what another of my blogmates, Tim Hallinan, likes to call “drawer” novels.  Those are ones in which you immerse your very being, finish with a flourish of pride, then stick in a drawer to go on and write one that might actually get published.  Thankfully, I have a very big drawer.

Buy it, so they’d have to reorder another one.

Actually, I was with my daughter in a New York City Barnes & Noble.  She promptly made me pose with a copy of my debut novel, Murder in Mykonos.  It was so obvious what was happening that a kind, thoughtful, elderly lady walked over, smiled, and said that she wanted to buy the one I was holding!  God bless you, Mom.

When I first learned I’d be published I was obviously thrilled in every sense of the word, but I also realized how close I’d come to missing that opportunity had I listened to my (then) agent.  At times you must go with your instincts…which on the day I learned of my deal were, “Drinks for everyone.”

Yes, I’ve seen that precisely on point, very funny video.  All writers had (and most will continue to have) those sorts of experiences.  They’re unavoidable for those of us who like the traditional pressing of actual, human flesh.  Which segues nicely into a more recent Parnell Hall video succinctly and hilariously capturing the digital ethos driving so much of today’s writing life, titled simply, King of Kindle.


My most unique experience was at a book signing in Athens for the second book in my CI Andreas Kaldis series, Assassins of Athens, depicting social unrest that actually came to be.  When a reporter asked me what role I thought my novel had played in precipitating recent riots, all I could think of to say was, “I didn’t think the book was that bad.”

Ebooks are here to stay and bound to flourish, as has every other form of digital entertainment.   Let us hope that publishing is not doomed to repeat the mistakes now plaguing the music and movie industries by thinking books are “different,” for there is an inescapable bottom line truth out there: the market will be served.  Prepare or perish.


Thank you so much for spending this time with us, Jeff!

I hope you'll all join me next week when my guest will be author Craig Johnson. See you then!
by Cathy at Monday, April 11, 2011